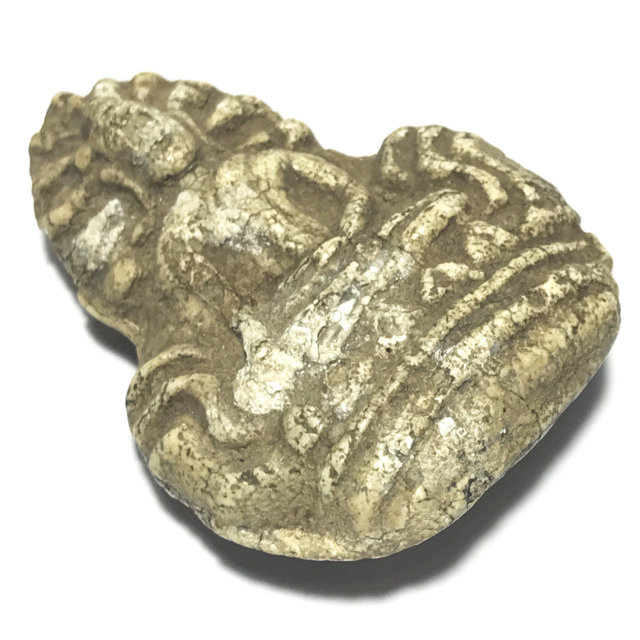 The Muan Sarn Sacred Clay of this Pristine and highly attractive exhibit is extremely time-hardened, and has a stone-like appearance, of an ancient amulet that is full of character. The amulet is considered an Ongk Kroo Reference Study Amulet. This Pim Chiang Saen however is dated from long before Somdej Pra Puttajarn (Dto) Prohmrangsri, and from the first of the three eras of amulets found within the Kru hiding place. 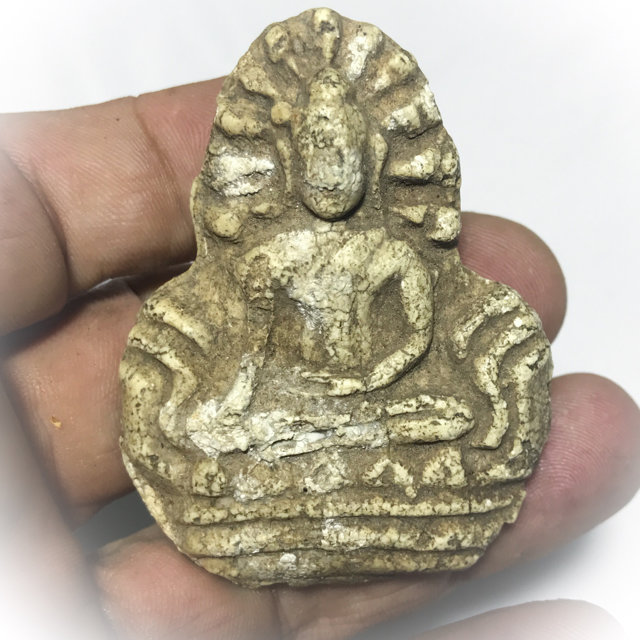 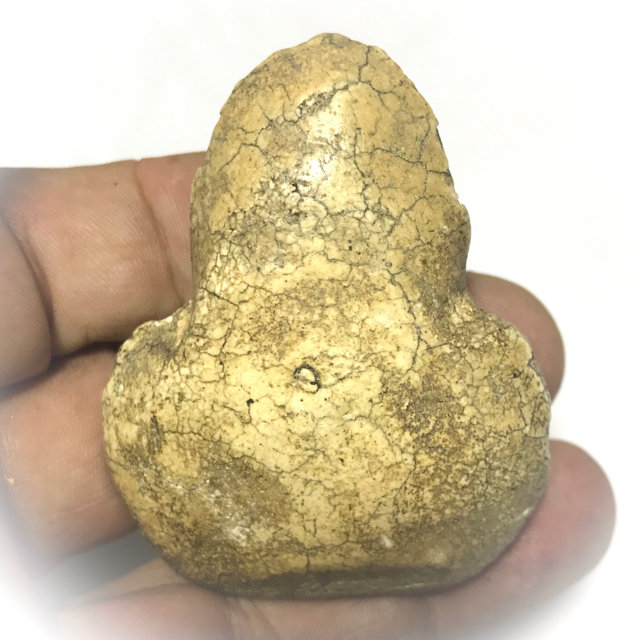 Thw Kru Tap Khaw amulets can in every sense be considered 'Ongk Kroo' (teacher model), for reference study of the Pra Somdej Wat Rakang amulet, for the following reasons; 1. The amulets from the second Era which were found, were almost certainly made by Somdej Dto Prohmrangsri, 2. This amulet is older than the Pra Somdej Wat Rakang, and hence is a good teacher as to how sacred clay that is more than 150 - 200 years old should look under the eye loupe. 3. The Muan Sarn Sacred Clay of the second Era amulets are almost identical in its appearance and ageing characteristics as the Pra Somdej Wat Rakang. The most highly [referred models Though are the first Era, which are much rarer and centuries older 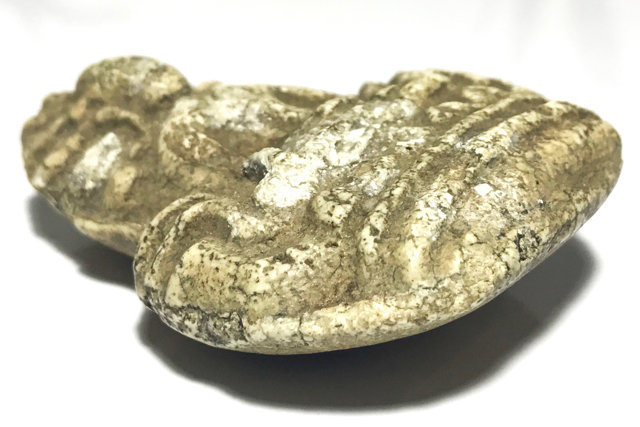 The Pra Kru Wat Tap Khaw series hiding place amulets are now becoming extremely rare, and have entered the Master-Class Pra Niyom Category. These amulets are yet another priceless possession of the devotee and collector of the Pra Dtragun Somdej Dto (Pantheon of amulets that are directly or indirectly associated with Somdej Dto in their making). 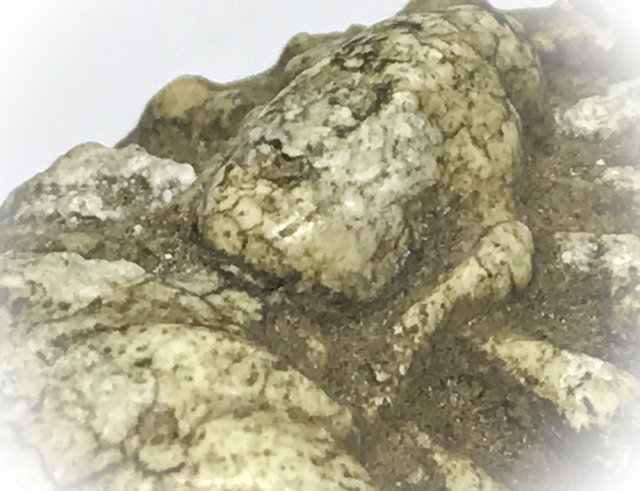 The Kru Wat Tap Khaw Amulet Find, was discovered in 2480 by a Mr. Dteng (Surname not known), who found them whilst digging around the temple grounds. The Kru was found to have amulets buried which were made during three different Eras of History; 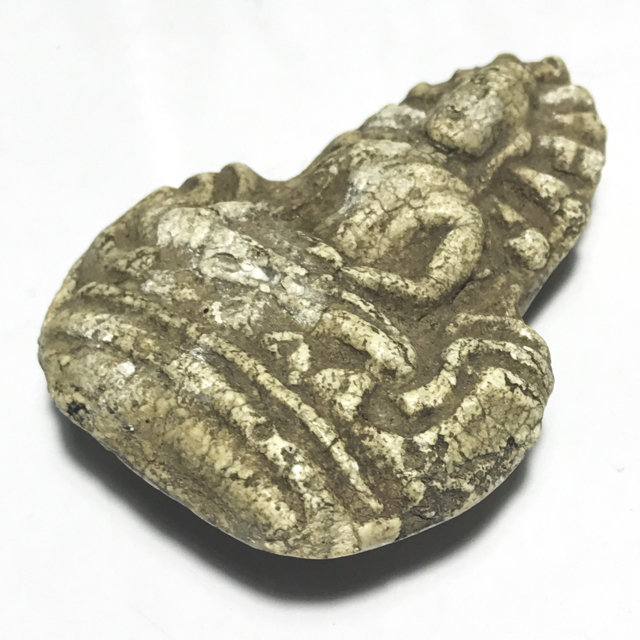 The amulets of the second era found were from the early Ratanakosin period (somewhere around the time of King Rama 3), and are believed to have been made and hidden by Somdej Pra Puttajarn (Dto) Prohmrangsri and Ajarn Saeng (Wat Mani Chonlakhant) and are hence roughly of an age between 150 and 200 years old. This group of amulets were also made from Nuea Pong Puttakun, which have an almost identical appearance with the sacred clay of the Pra Somdej Wat Rakang Kositaram of Somdej Pra Puttajarn (Dto) Prohmrangsri. 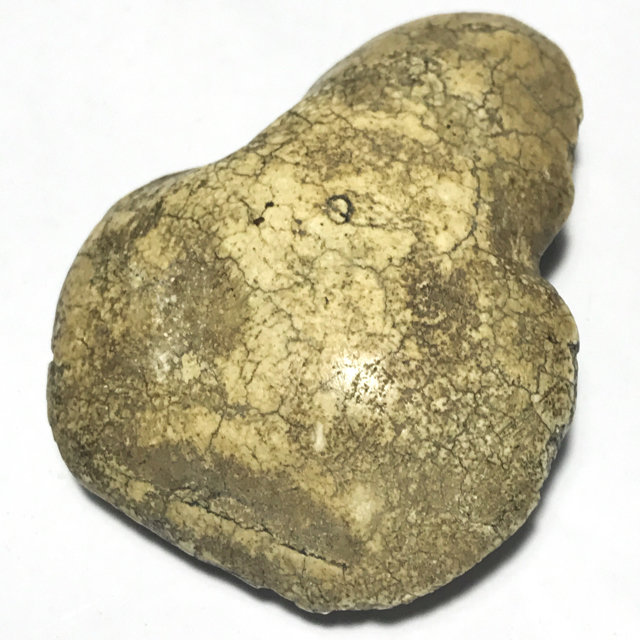 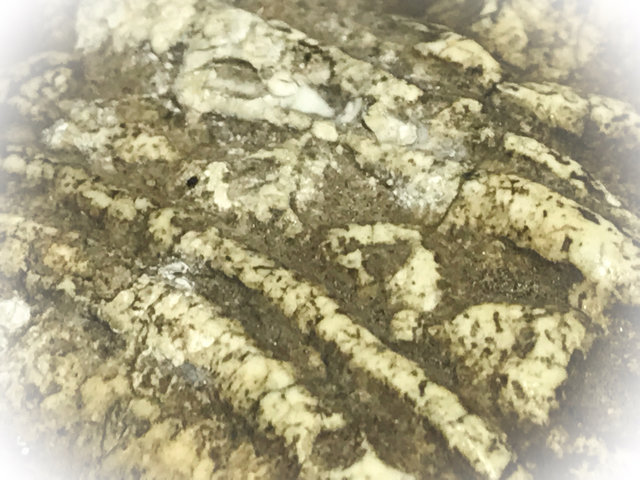 When all aspects of these amulets are considered and the amulets themselves are examined in all their aspects, it is the common conclusion with experts that the Great Somdej Pra Puttajarn (Dto) Prohmrangsri of Wat Rakang Kositaram must have played a part in their making and Burial.

Somdej Pra Puttajarn (Dto) Prohmrangsri is known to have hidden amulets in temples around the country, mostly in Central Thailand and in the North, and the amulets themself do not differ in 'Nuea Ha' (content), to the Pra Somdej Wat Rakang Kositaram. This makes the Second Era (Ratanakosin) amulets of course a perfect reference study teacher model (Ongk Kroo) for training the eyes to recognise a true ancient Pra Somdej Wat Rakang Kositaram amulet. 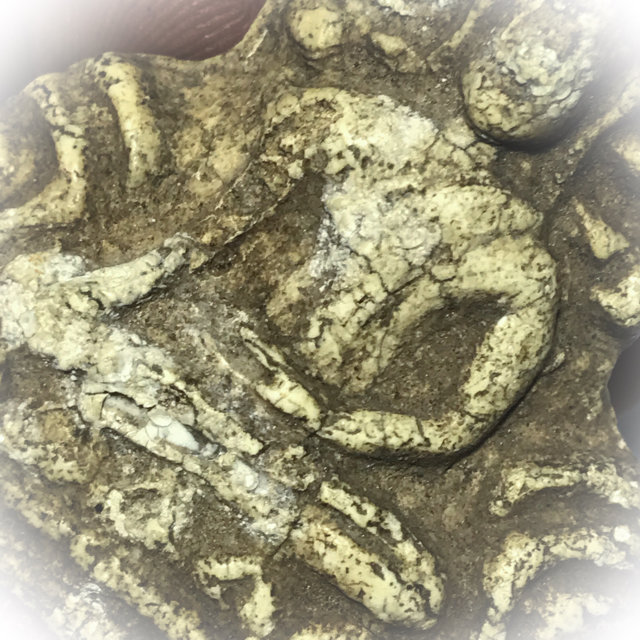 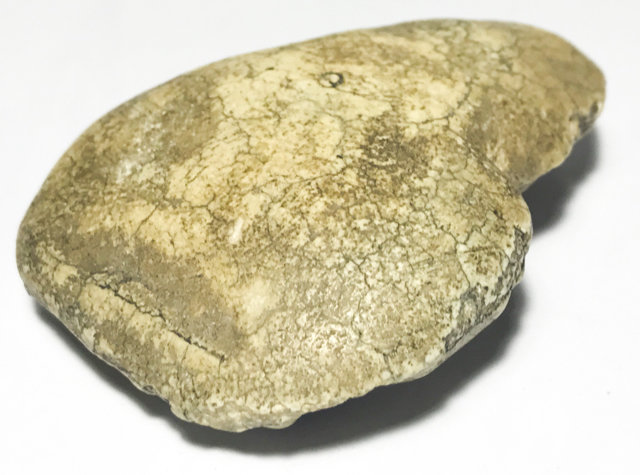 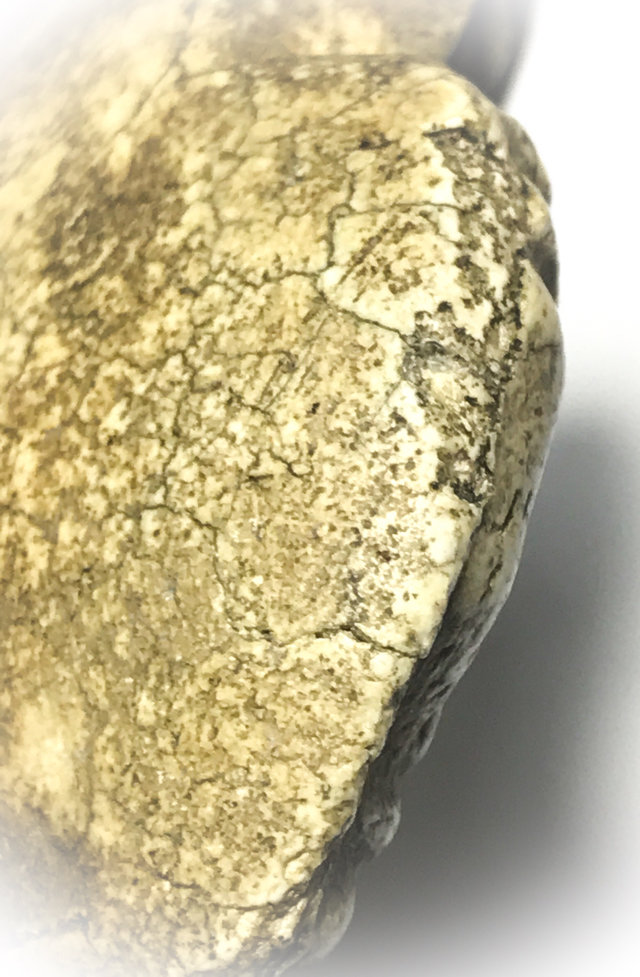 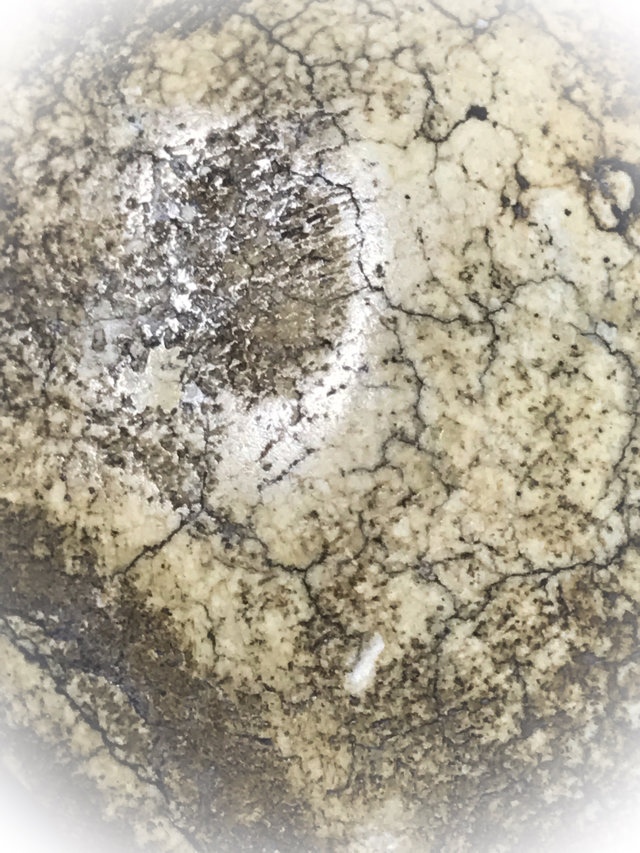 Because of the much younger age and appearance of the third era batch which was buried at a later time than the first two batches, and the replicas found in the batch, confusion arose, causing the whole Kru Wat Tap Khaw find to come under scrutiny and suspicion about their true age, and for quite a long time the amulets were overlooked, due to the fact that few people realised that the amulets of the two other eras were indeed much more ancient. 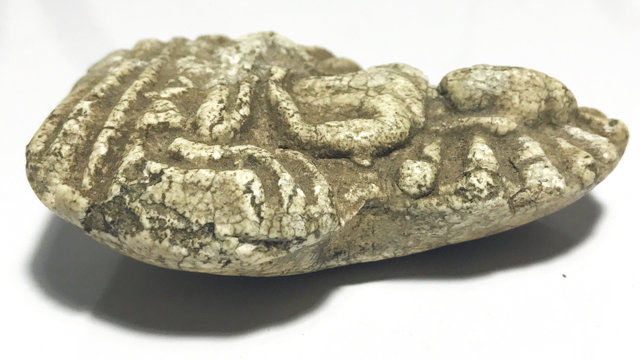 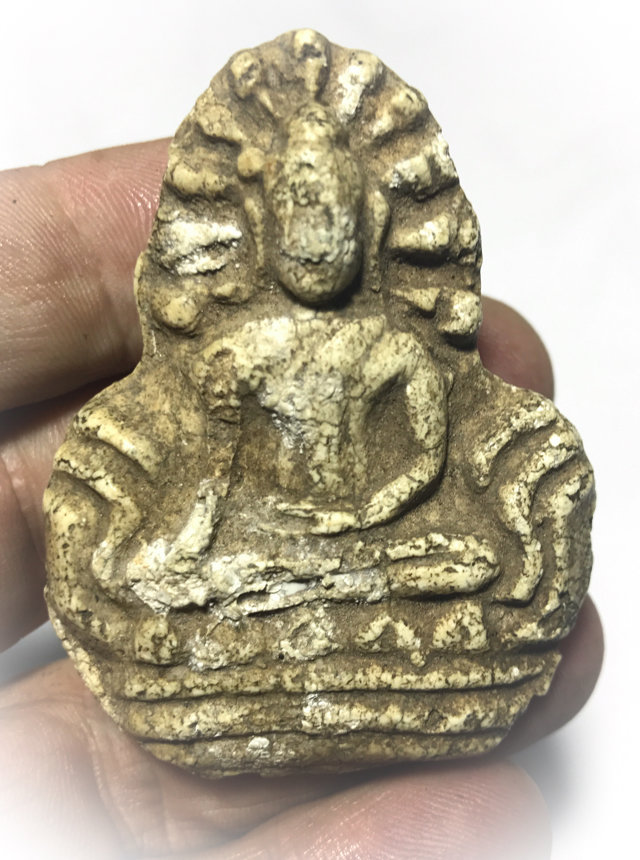 The inner circle aficionados of this series of Hiding Place Amulets have various beliefs depending on which group of aficionados; The main group assume that it was the Great Khrua Ta Saeng of Wat Mani Chonlakhant in Lopburi who made the first batch during the time or Rama the 3rd. Khrua Ta Saeng was the Kroo Ba Ajarn of the Great Somdej Pra Puttajarn (Dto) Prohmrangsri, who encountered him on Tudong forest wandering in the Ayuttaya region. He must have also then buried amulets from the Sukhothai Era, including this Pim Chiang Saen. 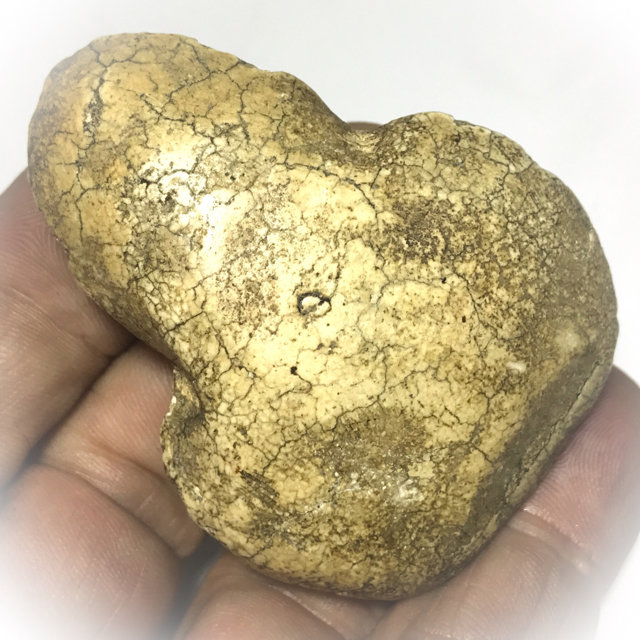 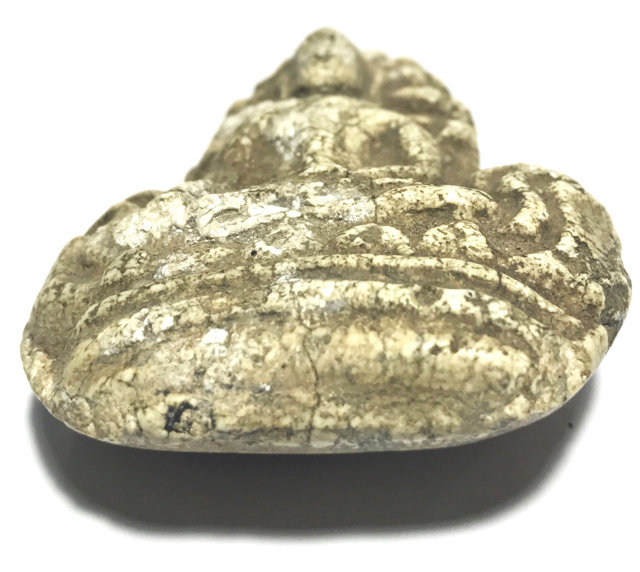 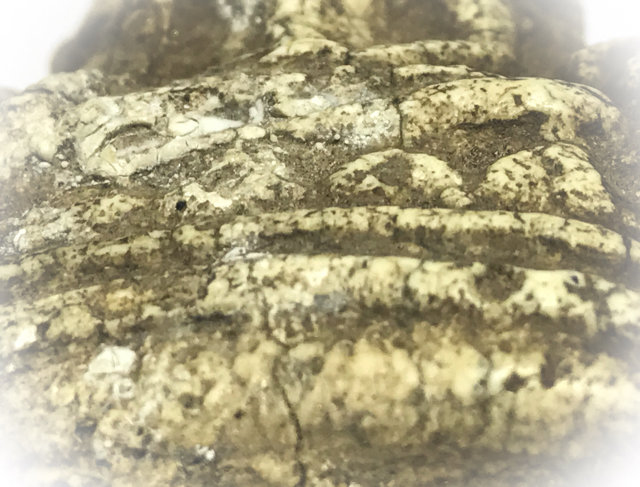 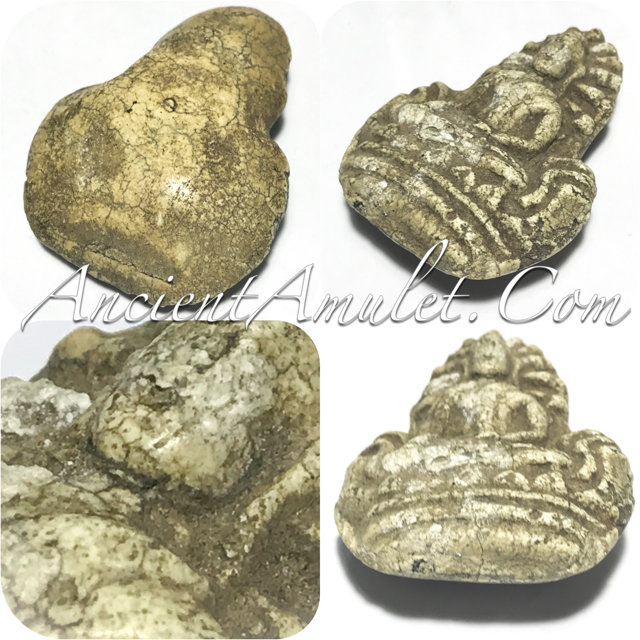