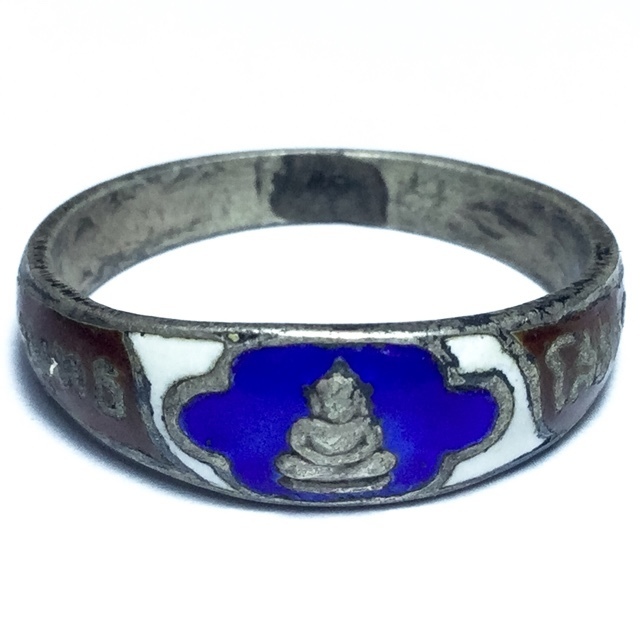 A very rare Solid Silver ring from the Wat Sothorn Woraram, temple of the Luang Por Sothorn Buddha, in Paed Riw, Cachoeng Sao. Over a half a century old now, the ring has an inner diameter measuring 1.6 Cm, suitable for the little finger of a man's, or ring finger of a lady's hand (medium size asian hand). Luang Por Sothorn is one of the 'Pra Koo Ban Mueang' 5 national top Sacred Buddha Images of Siam.

This ring was released in 2506 BE, and is forged from a sacred alchemical alloy of solid silver Magic Yantra Ingots and Artifacts, to make a solid silver rint, with the image of Luang Por Sothorn on the head of the ring, and Luxurious Ya Rachawadee Enamel Glaze in 'See Tong Chat' Thai Natonal Flag colours. 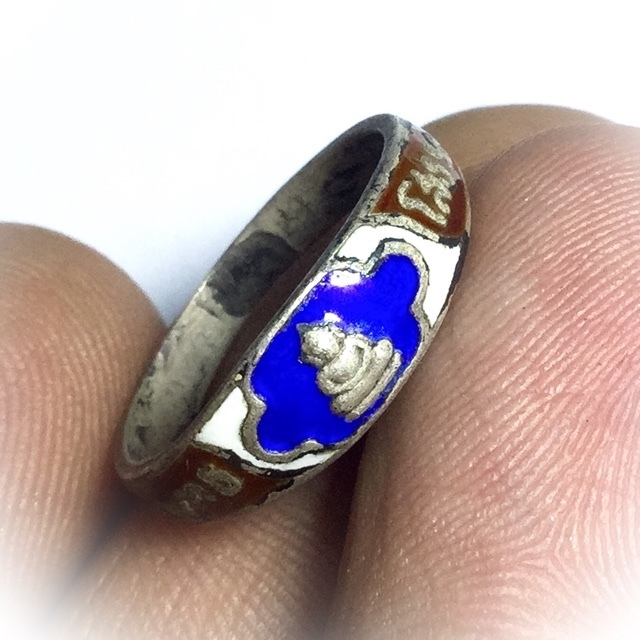 All editions of Luang Por Sotorn amulets disappear from the public marketplaces very fast (usually within 2 or 3 years of issue of each edition is sufficient to deplete stocks), and this ring is already a rarity since half a century. The Pra Luang Por Sothorn amulets are one of Thai Buddhist Peoples 'Pra Koo Ban Koo Mueang' (Nationally Revered Sacred Buddha Images), along with the Emerald Buddha and of course the Chinarat Buddha of Pitsanuloke. 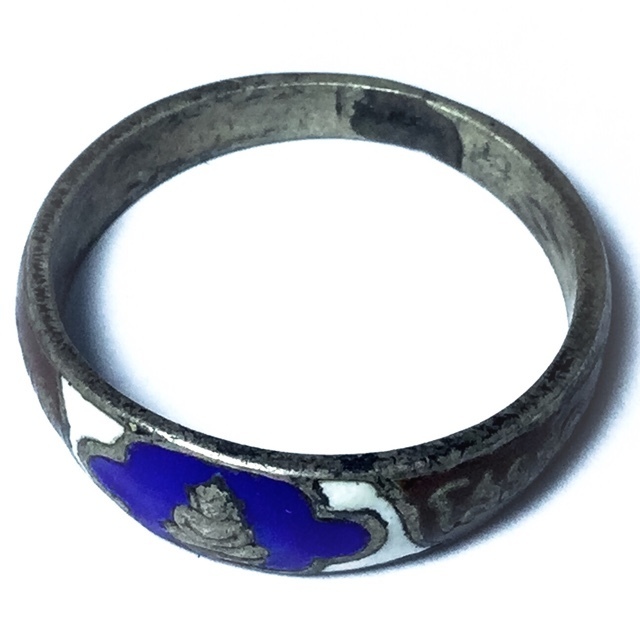 The Luang Por Sotorn Buddha Ring series began with its first ever edition in the year 2494 BE, and has continued throughout the decades on special occasions, with each edition entering the annals of the great all time classics, which is an automatic process with amulets from this incredibly important and sacred temple. 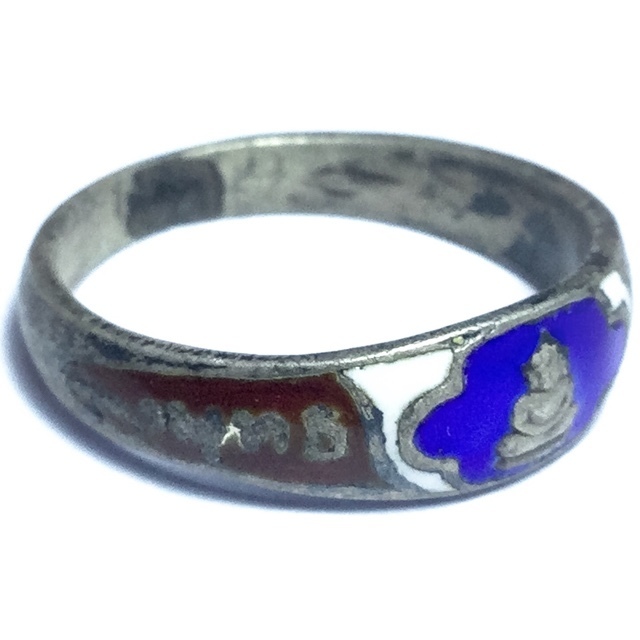 The ring is made from solid ancient silver alchemical artifact alloy, and has a tricoloured red white and blue rachawadee Enamel Glaze. The front of the ring features a tiny and plump style image of the Pra Luang Por Sothorn Buddha. The sides of the ring have Sacred Unalome Yantra, and the syllables 'Putta (Buddha) Sothorn' One syllable each side of the ring). 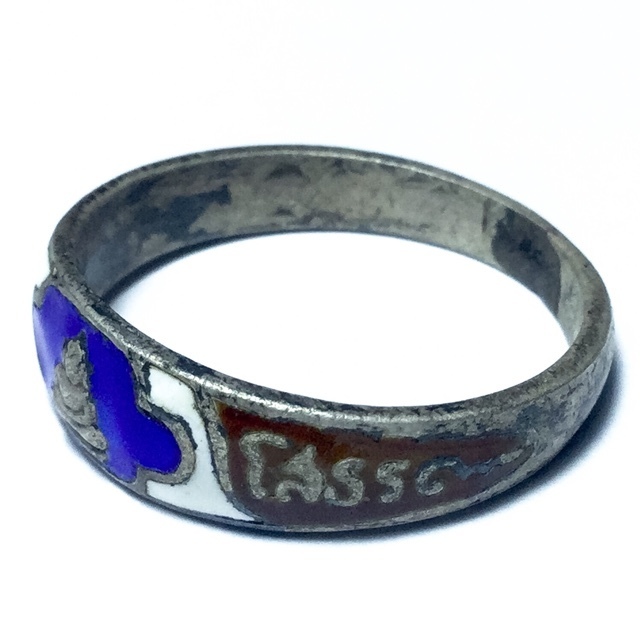 As always with editions of this Buddha Image released at Wat Sotorn, a Grand Buddha Abhiseka (Puttapisek) was held with Nationally Important Monks from around the country present to assist in the chanting of the Dhamma Chakra and the subsequent awakening and opening of the eyes of the Luang Por Sotorn Buddha images. Magical Power; Metta Mahaniyom, Serm Duang, Gae Aathan, Klaew Klaad, Kong Grapan Chadtri, Maha Lap, Maha Pokasap. 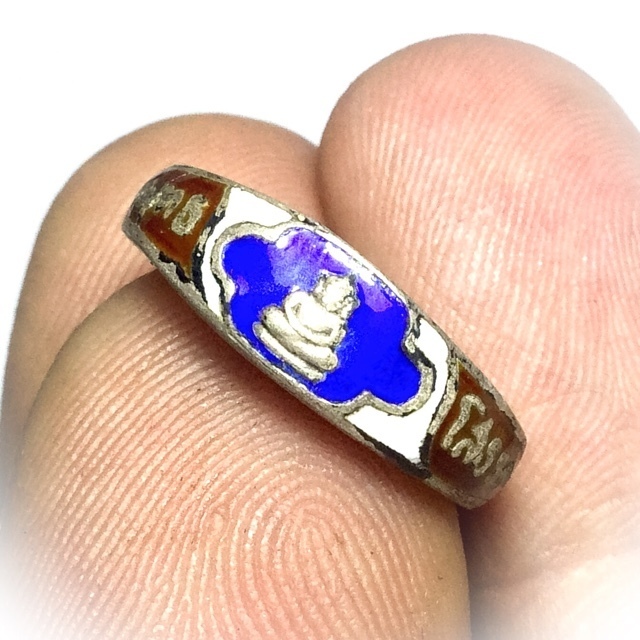 This is a highly recommended amulet for Buddhanussati, Meditation, Serm Duang Karma Improvement, and as a Great family Heirloom Amulet to pass down through further generations of your descendants. The Luang Por Sotorn Buddha is famous for its Miraculous Klaew Klaad evasion of deadly accidents power, and for its certain rise in rarity, Sacred Value, and is also considered a 'sure bet' with speculative collectors, for its sure increase in requirement, and spiritual Value as time passes. 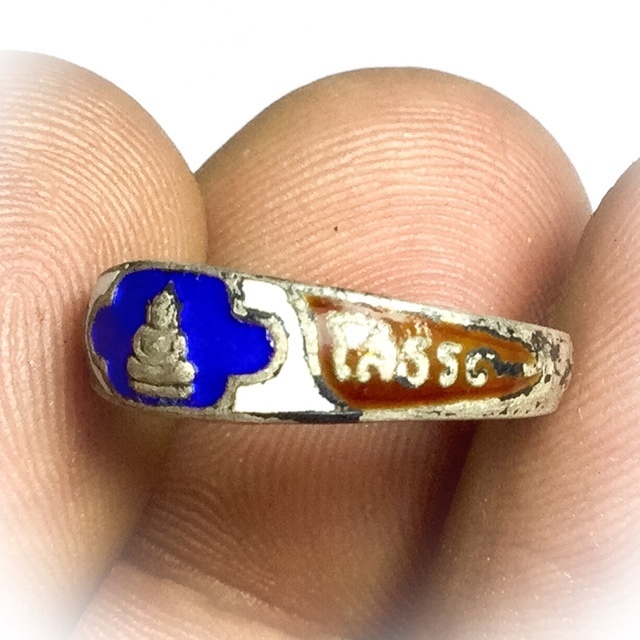 It is however very difficult to collect a large pantheon of the different editions, for Thai people and also foreign devotees of the lp Sotorn pantheon do not often wish to part with their amulets. It is an art in itself of practicing patience and constant vigilance, to spot and collect the lp Sotorn line of amulets. 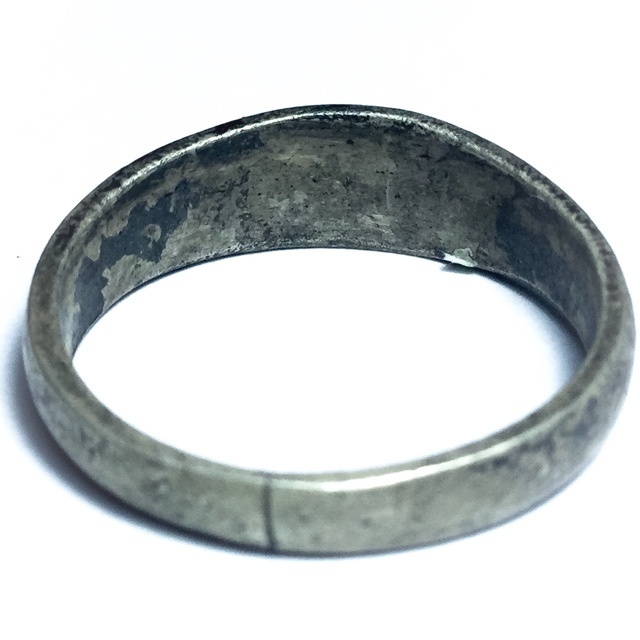 A totally accepted classic Pra Niyom Category amulet of International fame, that no Devout Buddhist or Serious Amulet collector would frown upon to wear and receive its protection and blessings. This amulet is an amulet that can be worn with pride, and surety of its power, and indeed, is seen by the most highly studied students and devotees of Pra Luang Por Sotorn, as a Priceless treasure, that is beyond the concept of monetary value. 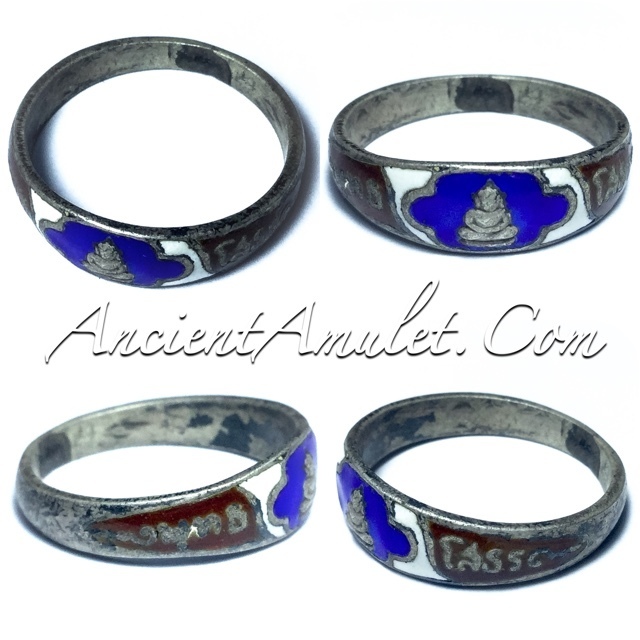