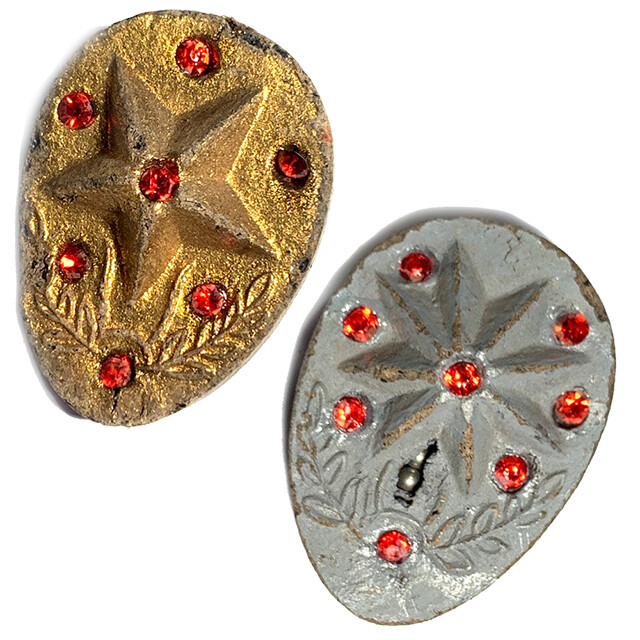 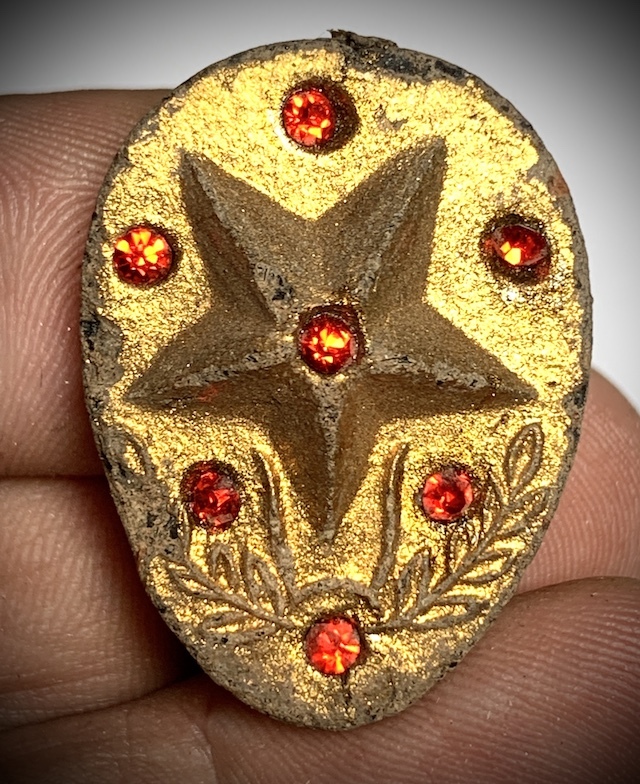 Free Registered EMS/DHL Express Airmail Worldwide is included with this amulet. This is the two sided 5 and 8 Pointed Pentacle version, in gold and gray coated Pong Asupa Muan Sarn Sacred Powders, with all Ploi Sek Gem Inserts present on both sides, making this a very unusually rare item to find in this condition. This particular example has a piece of Mai Gon Fa Pha lightning struck Treewood stuffed into the bottom side of the amulet, and Pong Wised special Prai powders inserted, this model, is not only suitable for men, but also a very recommendable model for lady devotees due to the medium Unisex size of 3.2 x 2 Cm. 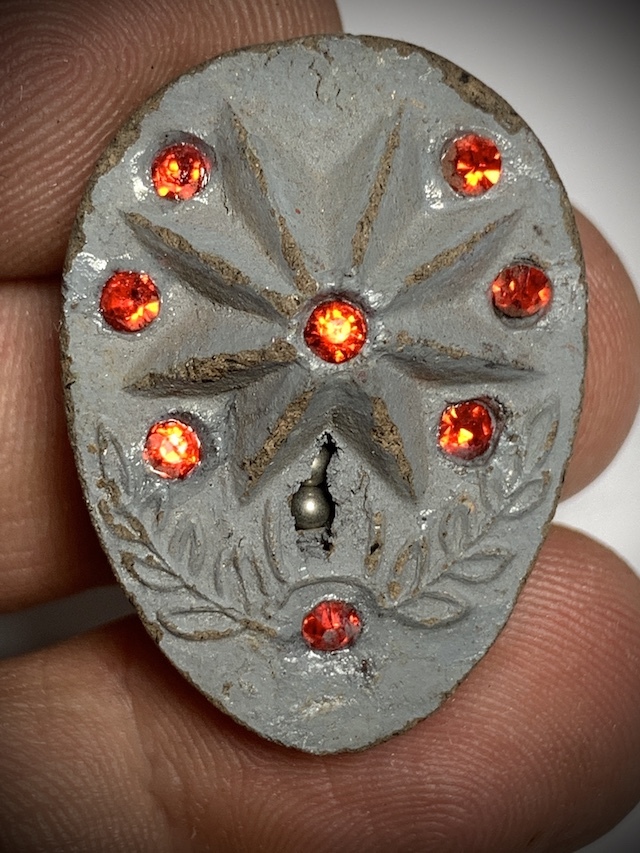 The Daw Aathan Hnun Duang has different stars on each side, one as a 5 pointed star similar to the Military Star, and one in 8 pointed Pentacle similar to the Police Force star. Despite their importance for the meaning which is attributed for the Military and Police force, which was of course intentional, there are deep spiritual meanings imbued within the symbolism of each star design. This amulet is commonly know for its Wealth Increasing Maha Lap Magick, but in truth, the amulet possesses an massive repository of attributed Buddhist Blessings, of very sacred and Auspicious Influences on the Forces of Karma. 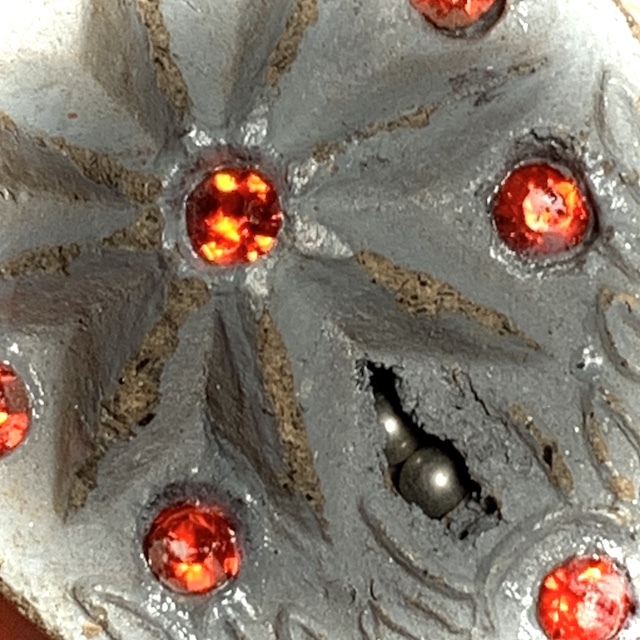 The amulet was recommended by Luang Por Pina, to be encased with the pendant ring at an angle, which is a tradition with the Dao Nai Pan Nai Pon, as was originally decreed with the first edition Mae Nuea Horm (Perfumed Mother) Lucky Star ('Mae Nuea Horm' 1st edition, was differentiated being somewhat Larger with a crescent moon below the star). 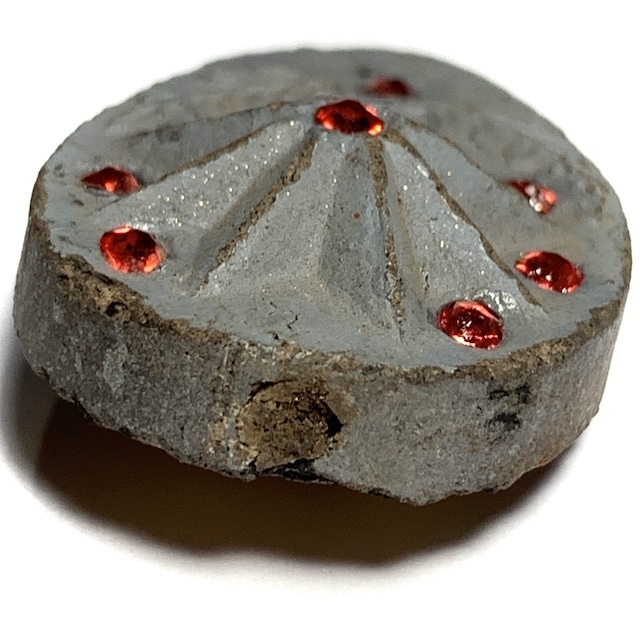 The base of the amulet has a piece of Mai Fa Pha inserted within the hole. The powers of the Daw Nai Pan Nai Pon are manyfold, but has a special ability given by Luang Por Pina which Luang Por Pina would say goes like this; 'whoever is not straight with you and cannot be trusted, will be spotted and exposed by the Dao Nai Pan or the Mae Nuea Horm, if you wear it tilted at an angle' 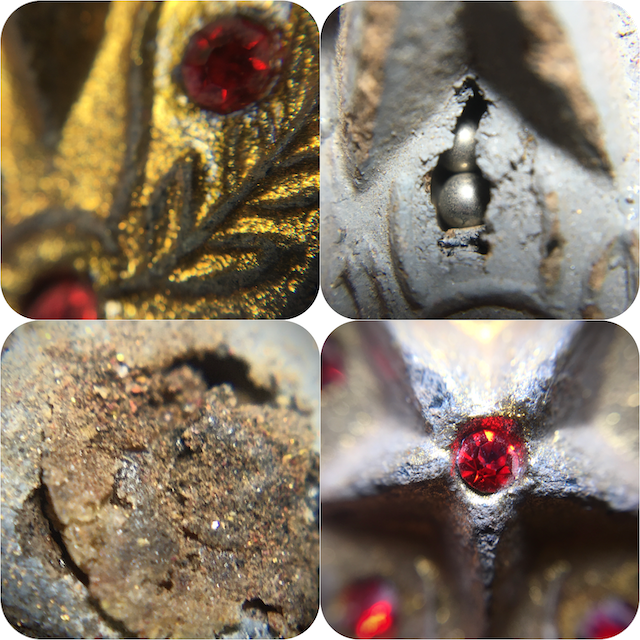 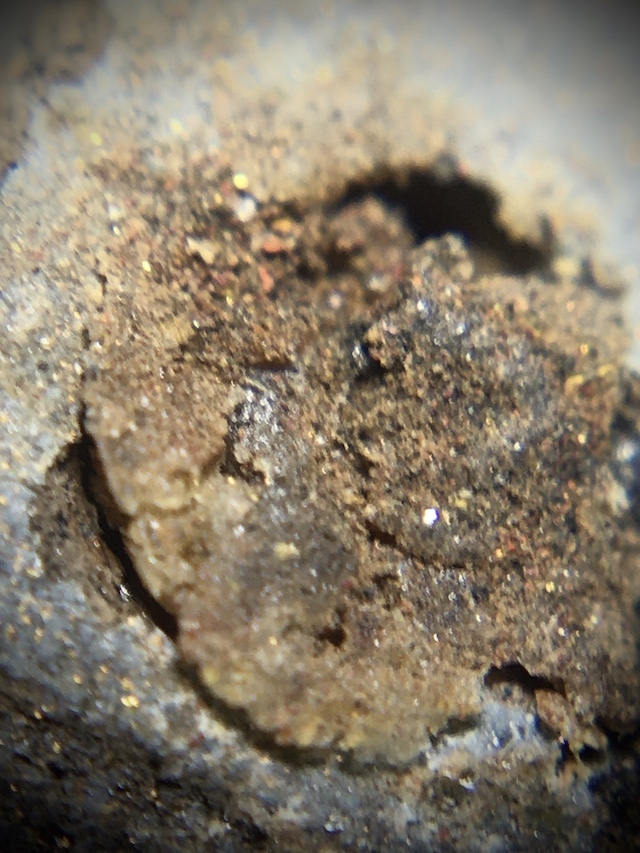 The Daw Nai Pan Lucky Star is made from a mixture of Highly Sorcerous Ingredients, Herbal and Prai Necromantic Powders, which are both incredibly difficult to find and obtain, and also very easy to recognise their presence within the sacred Muan Sarn Powder mixture. Those who have had an authentic Daw Aathan before their eyes, will be able to see instantly that this amulet is a very recognisable and distinguished exhibit with the clear to see presence of Luang Por Pina's Sorcerous 'Pong Asupa' Muan Sarn Sarn Powders. 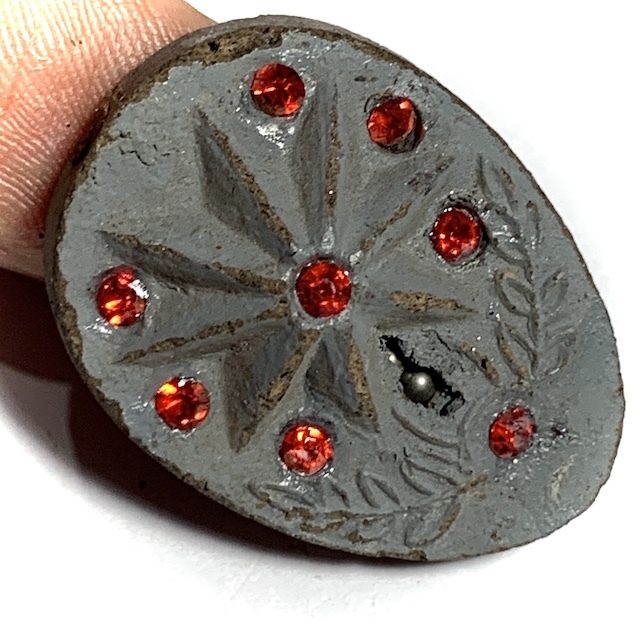 This particular exhibit is a Classic Piim of extreme beauty, and also one of the highly Preferred 'Pim Niyom' Master Models and can be considered 'Ongk Kroo' (Teacher Reference Model) for a perfect reference comparison of authenticating other less recognisable Star amulets of lesser preference. 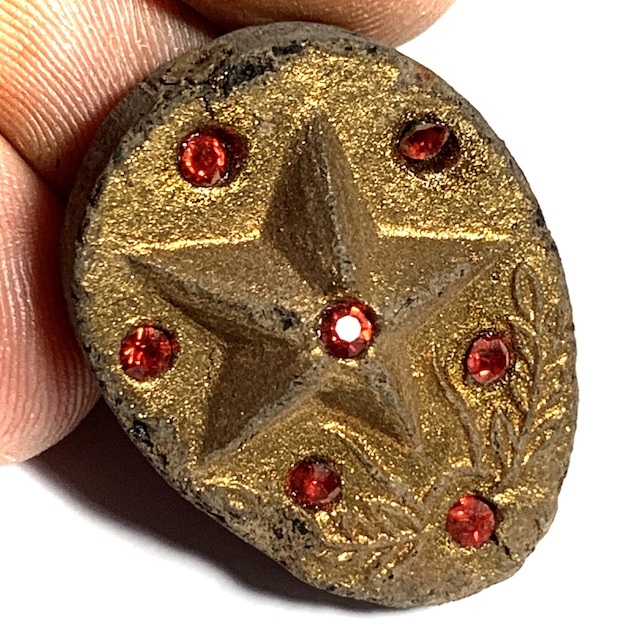 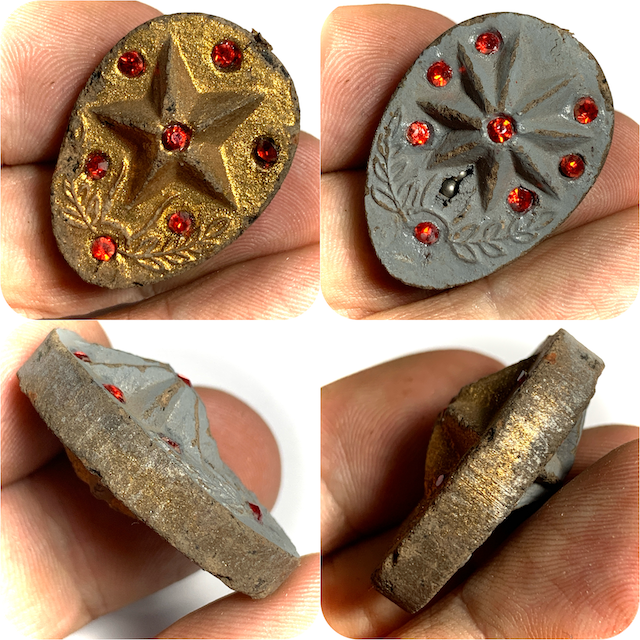 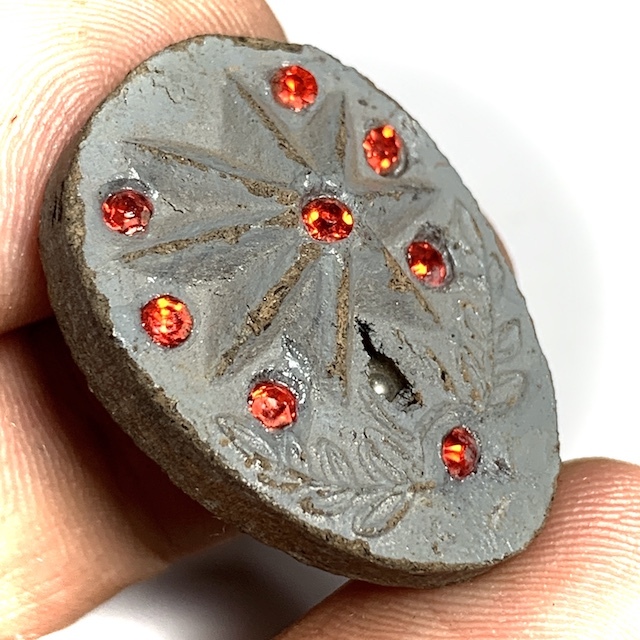 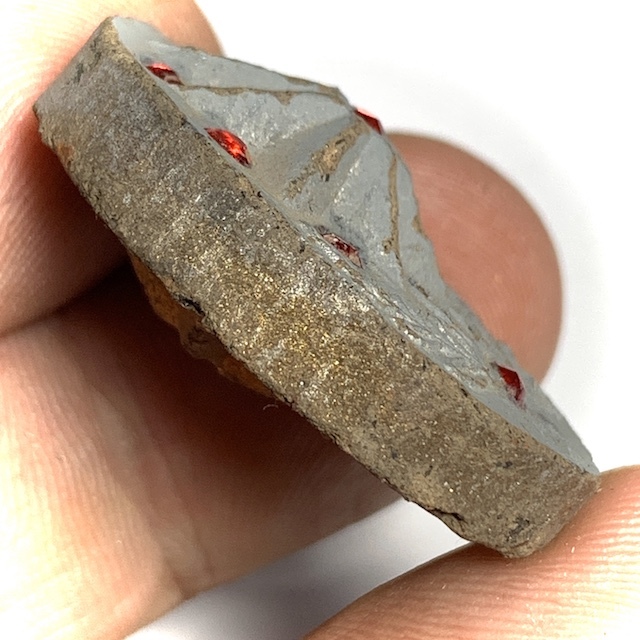 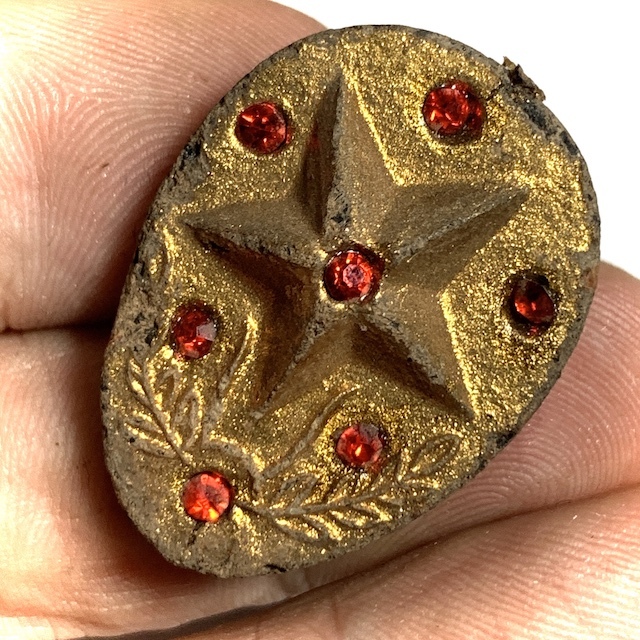 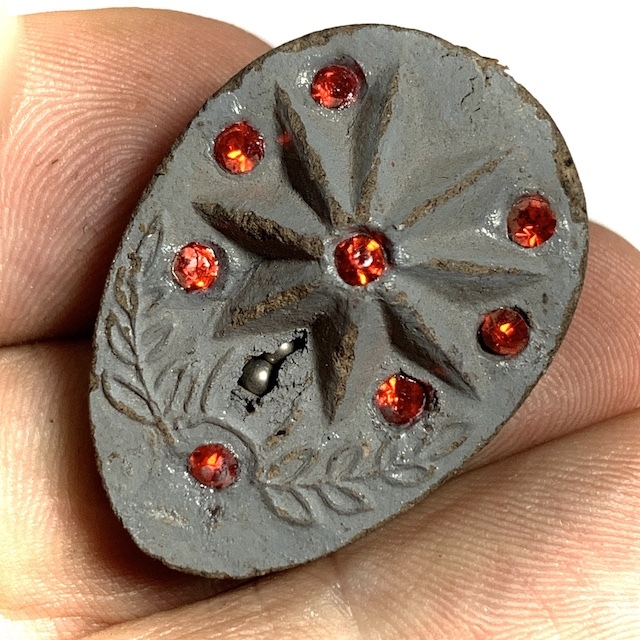 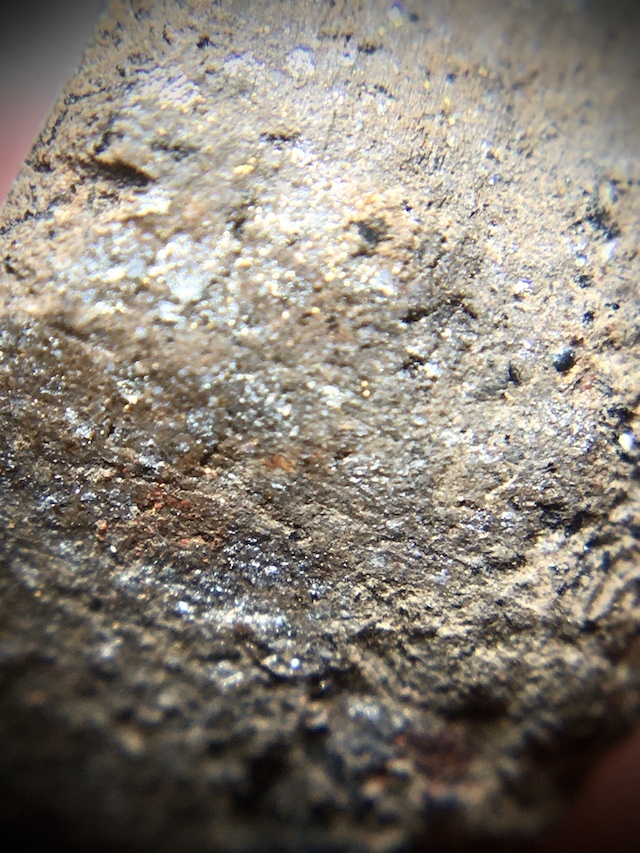 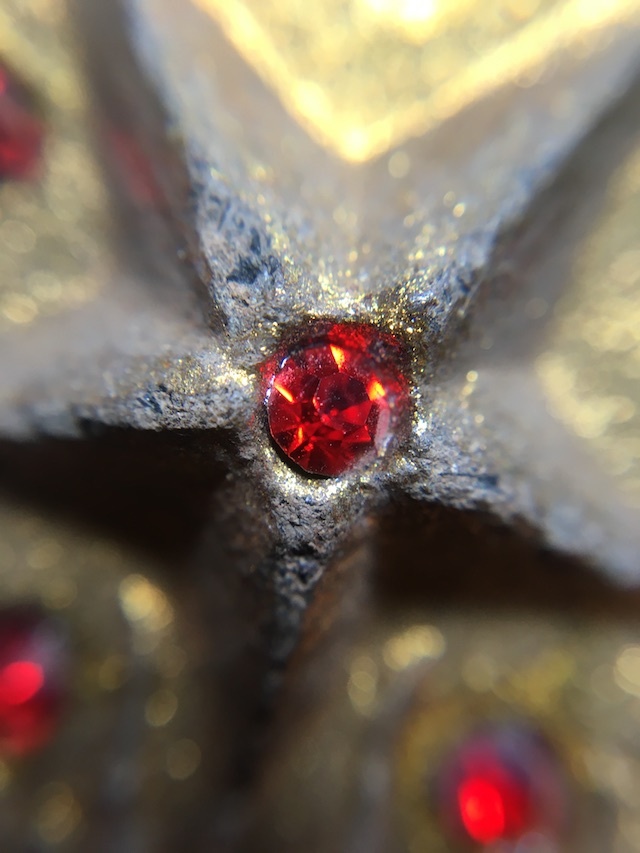 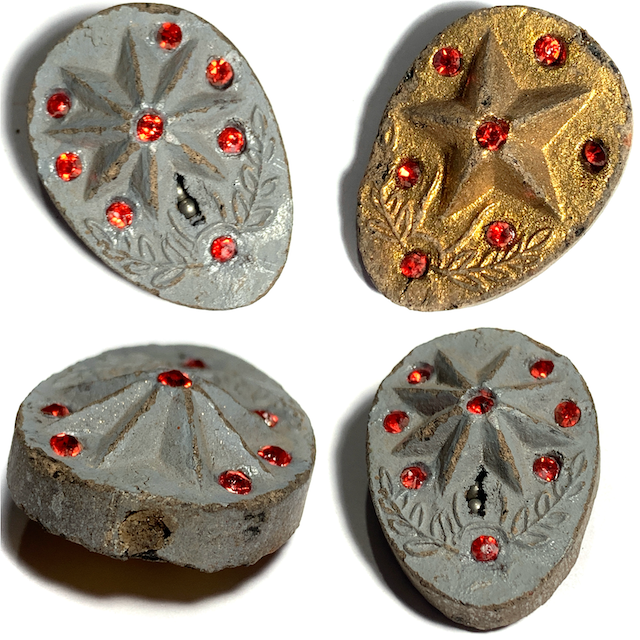