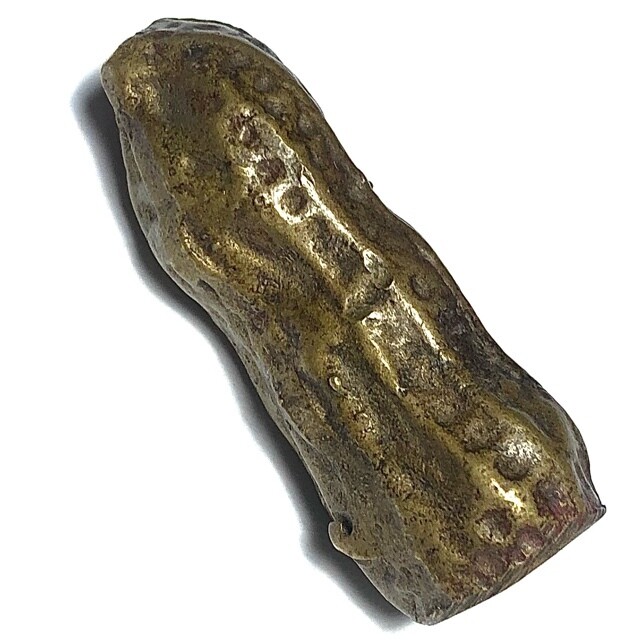 A rare sight indeed in this day and age, to find such an item, of which there are only rare occasions to encounter the Takrut Tua Lisong of Luang Por Boey, which is so very hard to find under any circumstances. Highly Favored by business persons and gamblers, and those who seek the magic of invincibility and evasion, and those who seek lucky windfalls in lottery. 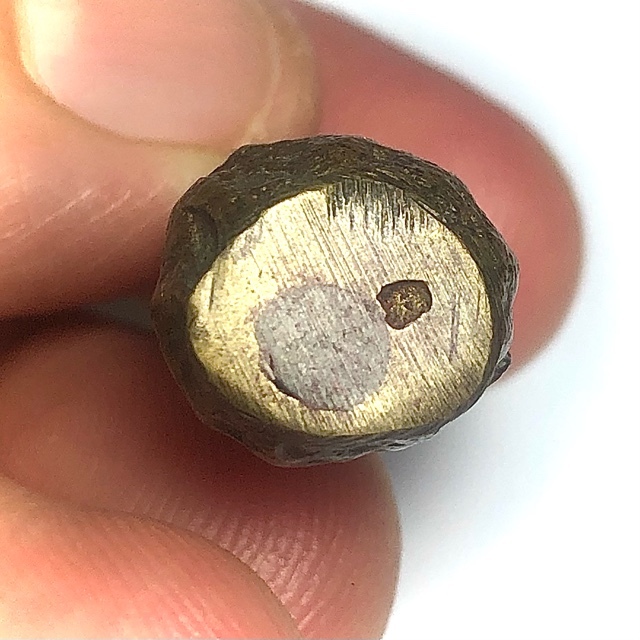 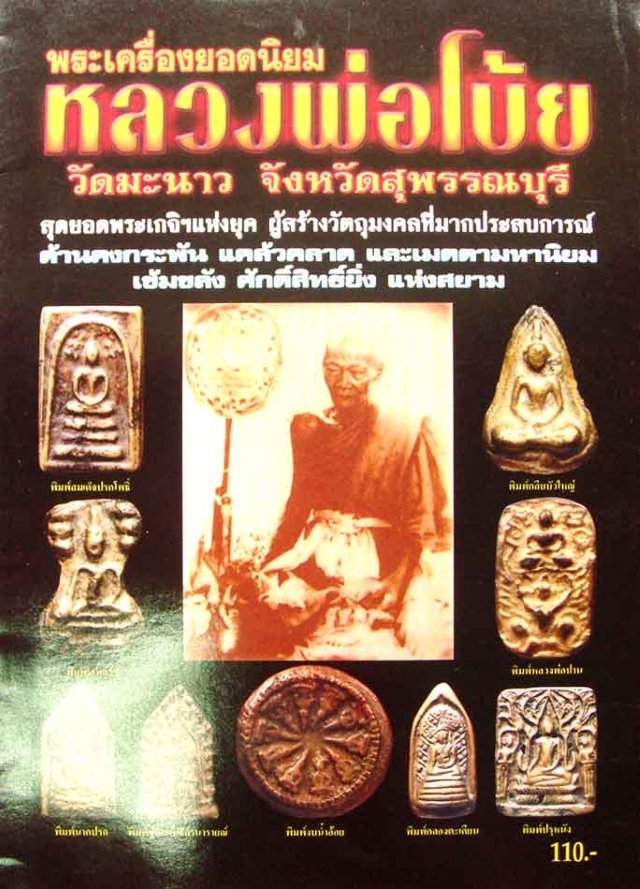 Luang Por Boey of Wat Manaw, was one of the Great Famous Master Sorceror Monks and Alchemy Masters of the Supannburi Province. He was immensely respected and revered by the local devotees, for his highly perfected behavior, speech and merciful nature, and for his dedicated adherence to his Most Diligent Dhamma Practices. 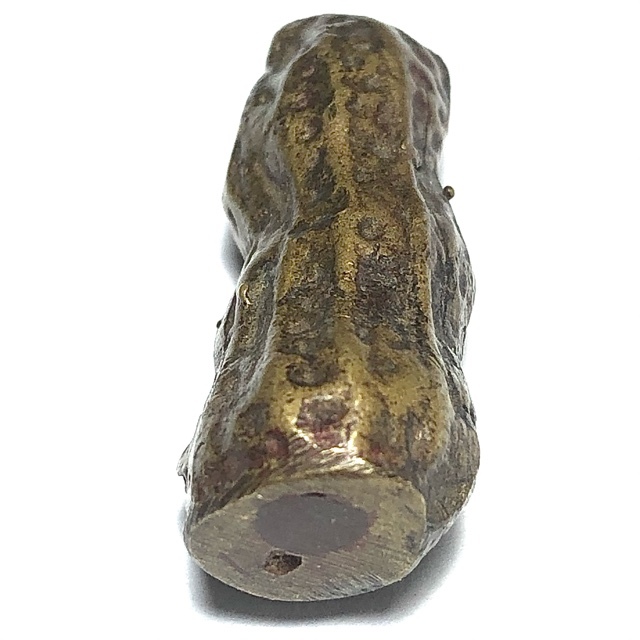 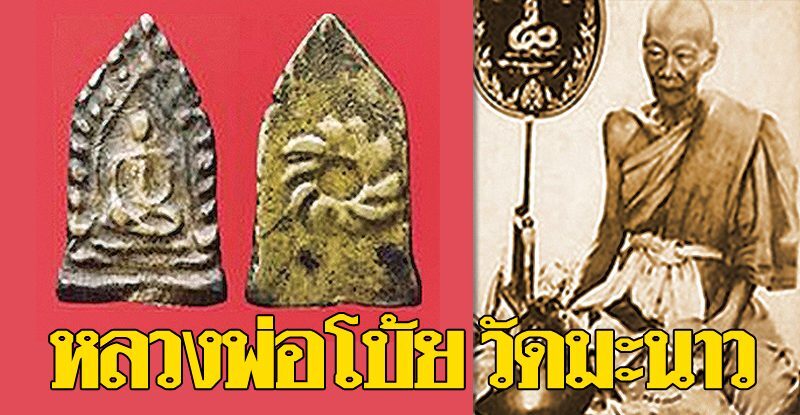 Luang Por Boey was born in the Village and Municipality of same name; Bang Pla Ma, in Supannburi in the year 2434 BE, a hundred and thirty years ago, at the time of writing (2021). It was obvious since his very early childhood, that he possessed a powerful tendency towards seeking Dhamma, and the Buddhist Faith. Even as a small child, he would often disappear to the temple to listen to the Dhamma Teachings, help the temple with its daily duties such as cleaning, sweeping and other tasks, and to Perform the Morning and Evening Prayer Chants in the Tradition of Thai Buddhist Uposatha. 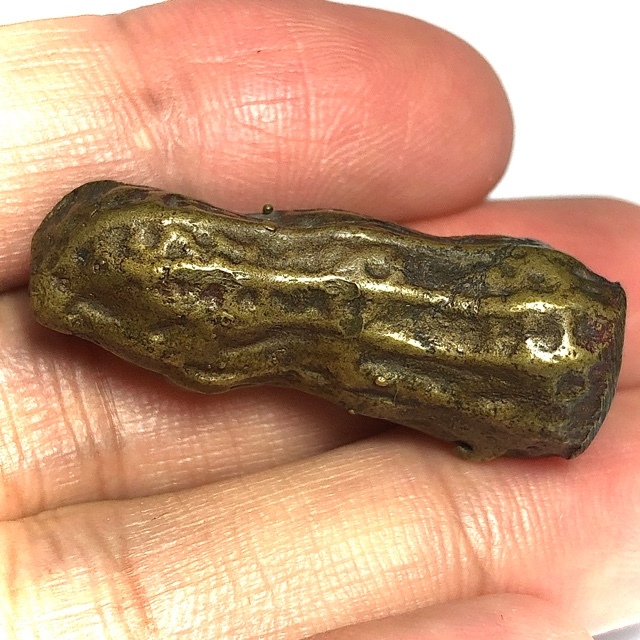 As Luang Por Boey reached the age for Ordination (20 years old) as a Bhikkhu Monk in the Buddha-Sasana (Buddhist Creed),in the year 2454 BE, he was given Ordination Ceremony at Wat Manaw. Once ordained, he performed constant diligent study of the Dhamma Vinaya Buddhist Canon, learning both Pali Sanskrit, and the Ancient Thai-Khom Khmer Sanskrit Script used for Magical Wicha Grimoires, Sacred Yant, and Spell Inscriptions.

After 3 years of study and practice, he traveled to Bangkok, to study and contemplate the Dhamma Vinaya in more depth, to understand in fullness the rules of Ordination, and the perfection of the practice of the 227 rules of renunciation of a Thai Buddhist Monk, and Savaka (Devotee/Listener), of the Buddha. He did this at the Temple of Wat Chee Ba Khaw (Temple of the White Robed Sage - Officially callled 'Wat Sri Sudaram'), and also was able to receive tutelage and Wicha from the Great Luang Por Parn at Wat Bang Nom Kho for a period of one year. 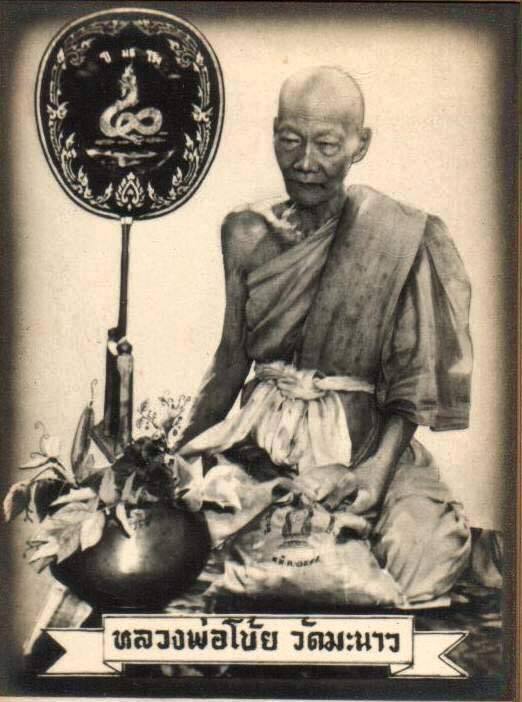 After this, LP Boey returned to Wat Manaw in the year 2467 BE. Luang Por was a Monk who loved his Solitude, and would always rise at 4 am every day, and perform Buddhist Prayer Chantinig until the sun would rise, and then he would go on Bintabat to seek Alms (food offerings), which is only allowed after sunrise, and eating one meal a day before midday, with all offerings mixed into one single mash in the almsbowl with his hand.

When he would return to the temple beladen with food offerings, he would ask all the other Bhikkhus (Monks) of the temple, to fall into line in a queue, and would distribute food to each Bhikkhu personally dishing out each person's food allocation himself. He never failed to do this each day throughout his life of practice at Wat Manaw.

Luang Por Boey was always extremely dedicated to his duties as a monk of the Temple, and his duty to serve Buddhism, and Spread the Buddha Dhamma to Devotees. He was always adherent to his nightly meditations, and his Kuti hut was always very sparse with no unneeded material possessions apart from the 4 requisites listed in the Vinaya Pitaka, as the four things needed for basic survival, for Monks. No kind of luxuries or cushions, or other forms of worldly comforts were used. 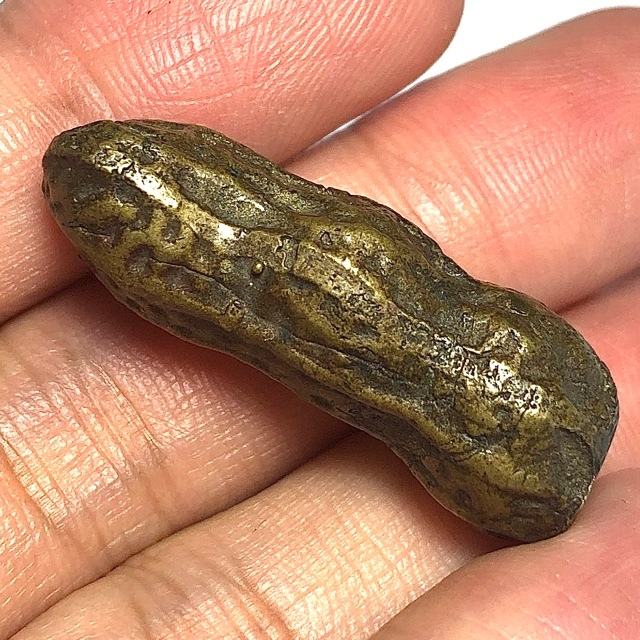 The time came when Wat Manao found itself without an Abbot, LP Boey was the first and foremost to be asked to be the new Abbot and Kroo Ba Ajarn of the Temple, but Luang Por Boey staunchly refused the elevated position of Abbot, for his practice was focused upon spreading the teachings of the Buddha, and to help living sentient beings without wish or need of anything in return. His abilities in Puttakom Buddha Magic were second to none, as a result of his unwavering diligence in practice, and disinterest and disattachment from any desires of fame or elevated status, and his powerful daily chanting, meditation, and adherence to his strict practices of a truly ascetic mendicant monk. He would use his Wicha to perform blessings, remove curses, heal, and empower amulets to protect and bring Prosperity, Protection, and good Karma to Devotees. He would make Sacred Yantra on takrut amulets, and Pha Yant Prajiad cloth, with Wicha Kong Grapan Chadtri, and Klaew Klaad, and was a Master of Holy Water Empowerment, which was used to spray devotees, and was renowned for its Sacredness. 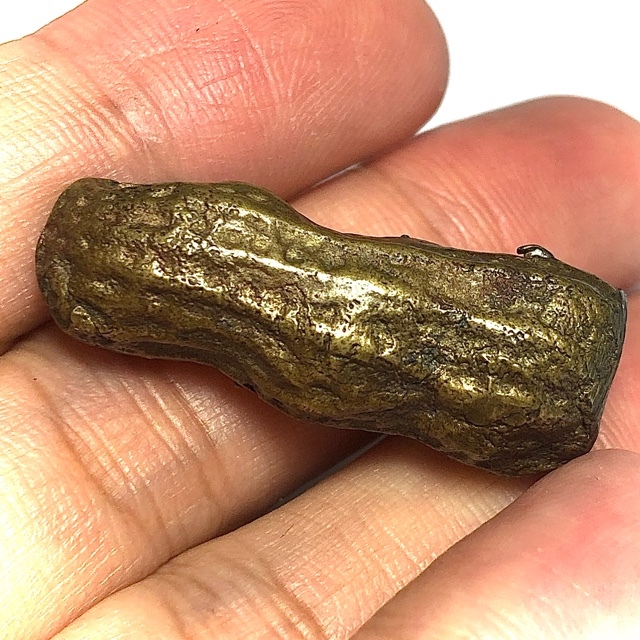 His many forms of amulets, some in Sacred Muan Sarn Powders, but mostly made using Alchemical Metallurgy, were extremely revered for their immense power and sacred blessing which they brought to the Devotee. He released amulets throughout his life in the Sangha right up to his final editions in the year 2508 BE, which was the year he passed away. His passing brought great sadness to Devotees around the Nation, for the loss of one of the Great Masters of the Olden Days Era, having left this world without yet another Master Guru with Impeccable Practice of Selfless Giving to Others.

In his Early years making amulets, he would most often use sacred treewoods to carve idols and effigies, and Buddhist amulets of various forms, until the year 2473. 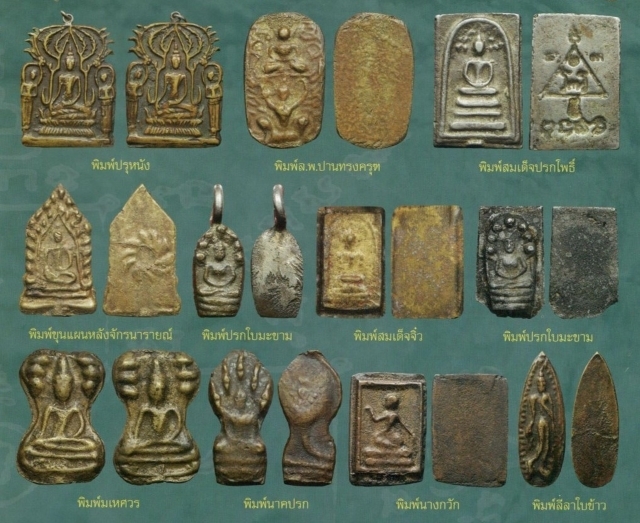 This was when he began to make his Alchemical Metallurgical amulets, once he had the necessary resources to produce this kind of amulet, wich is so difficult to forge and cast into the desired form, and which has an Alchemical formula that requires a perfectly balanced admixture in order for the smleted ancient artifacts, metallic inscribed ingots, and other sacred metals to fuse into one substance. 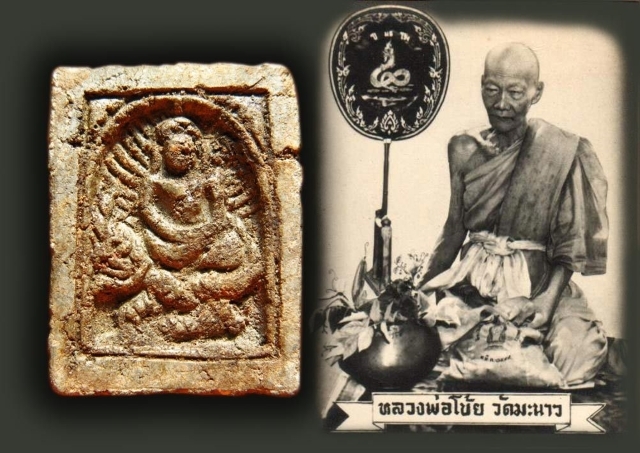 In the Year 2479, LP Boey made his first edition of amulets in Nuea Din Phao (Baked Sacred Clay), n the Year 2500 BE, he then made a series made from Nuea Chan Hmak Betel-Areca Nut Paste with the image of Luang Por,(Chan Hmak is Betel Leaf and Areca Nut, with Pink Acidic Cement ground from seashells, Chewed by the Guru, considered highly sacred and powerful by Thai Buddhists, for the Guru will perform Incantations and Imbue Prana (Chi) Elemental Forces using Air Element (Breath), to empower the Betel Nut throughout the process of chewing it. 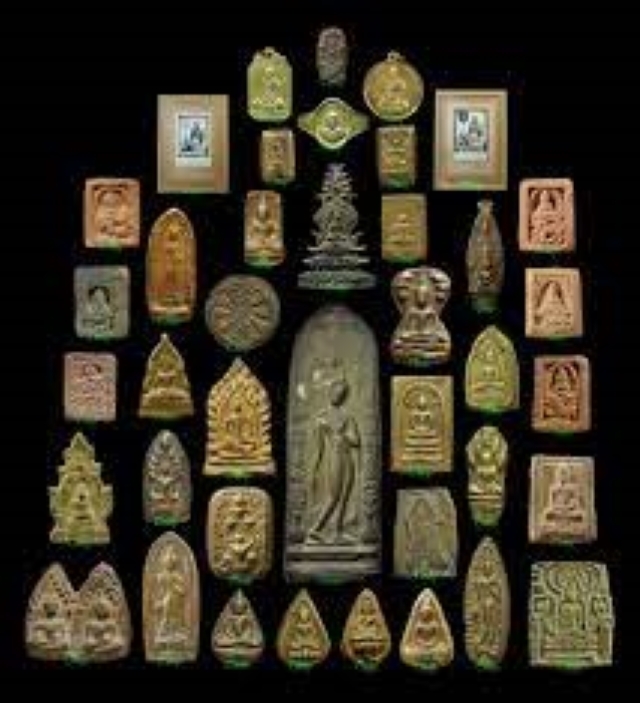 Later, the Rian Glong Kreung Ongk half Torso Cameo Image round Guru Monk Coin, was released after his passing, during the Funeral Ceremony of Luang Por Boey, and is also very rare and highly regarded by Devotees and Collectors, as being Sacred and Blessed in Spirit by LP Boey during the Funeral Ceremony, as his Spirit Left his Body and Rose up to the Higher Realms, enveloping all those at the Ceremony, and the amulets, with his final blessing in this world.

His Devotees still pray to him in the Higher Realms, to bestow his Heavenly Blessings down to Earth upon those who revere him and follow his teachings; To keep the 5 Precepts as best they can, and increase their efforts to reduce selfishness, and develop compassion, generosity, the intent to help others, and equanimity to know to not suffer yourself, when you cannot change a situation that is beyond your control (the 4 Heavenly Abodes). 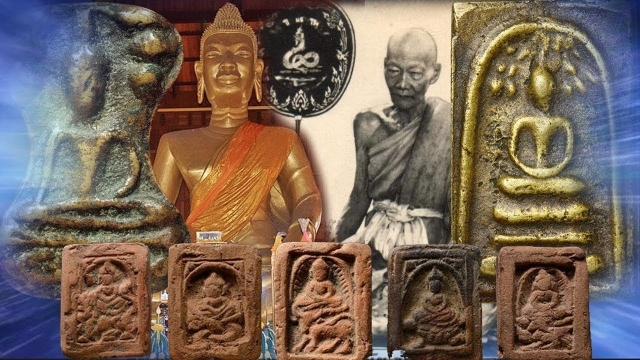 All of the amulets of LP Boey were issued by him, for free during his Ceremonies, and he always refused to ask for any donations or put any price on his amulets, for he only ever made amulets for free distribution, without wishing for anything in return. This is Ironic, for this merely has increased peoples' belief in the Sacred Powers of LP Boey during his lifetime, and made his amulets so desired and revered, for what could be more enticing, and pure, than an amulet from a monk who never ever made an edition to raise funds. And who only ever distributed 'Pra Jaek' (Free Amulets), to his Devotees.

There are so many different forms of amulet made by LP Boey during his trajectory, that it is not possible to list them all, but to mention some of the rarer Pim, one could mention the Pim Sum Gor, Pim Prok Po Bodhi Tree Buddha, Pim Leela Wandering Arahant, Pim Khun Phaen Jakr Narai (Vishnu Chakra on Rear face), Pi Pra Paruhnang, PraMahesworn, Pra Nang Paya, Pra Somdej Lor, Pra Gleeb Bua, and many other Pim, as well as his famous final edition Tua Lisong Peanut of Prosperity and Protection Animist Charms of 2508 BE. 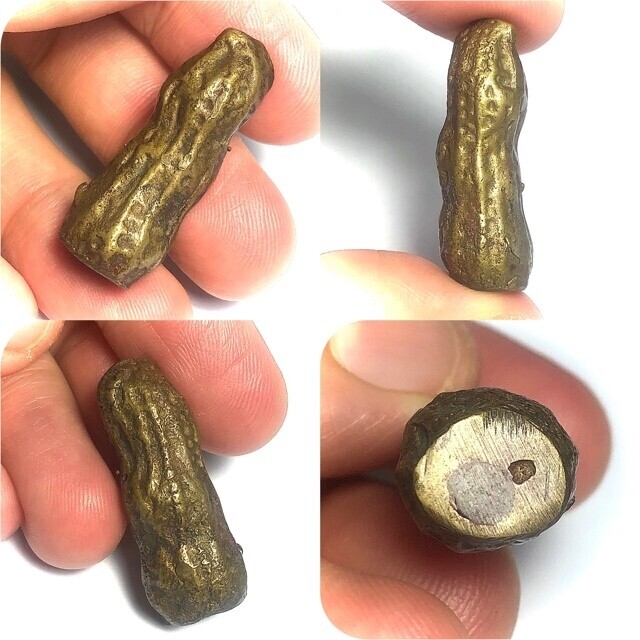