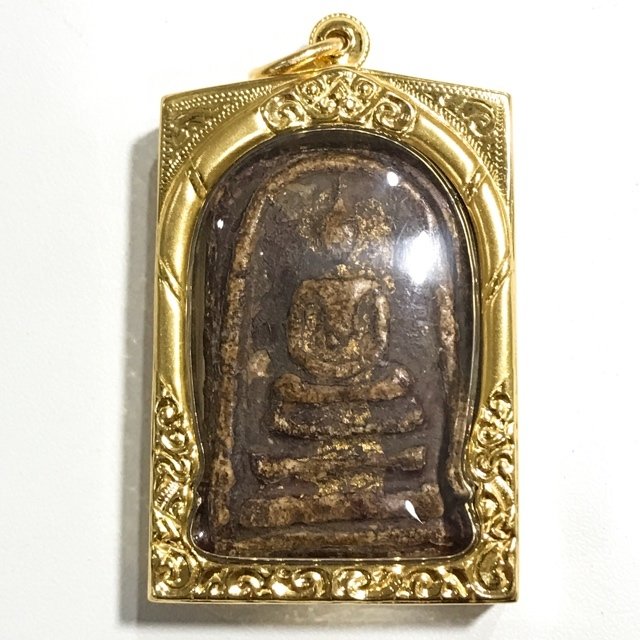 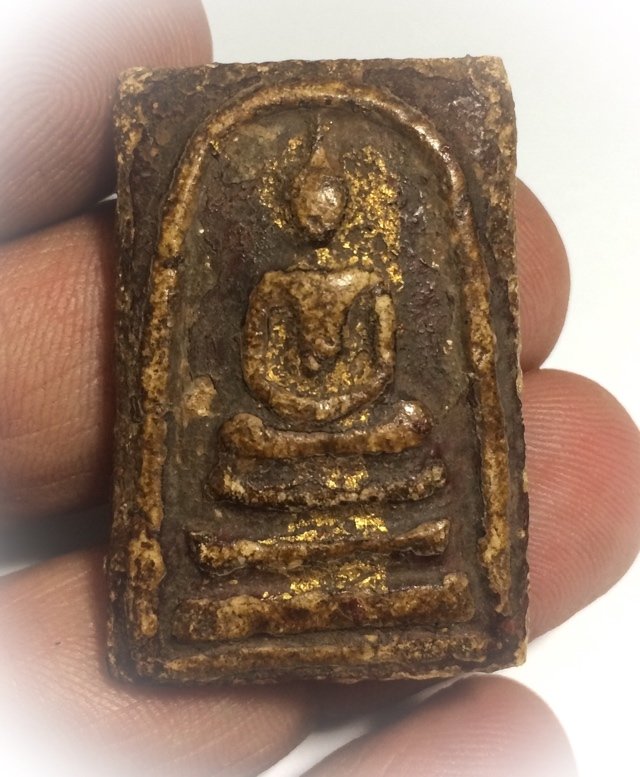 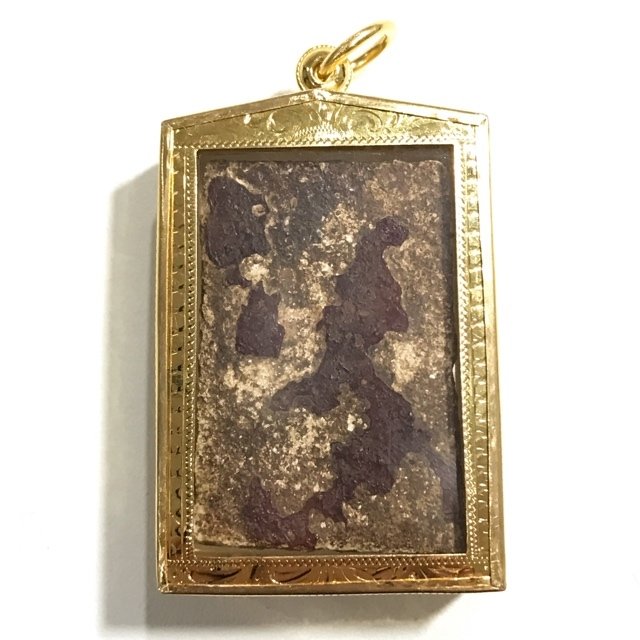 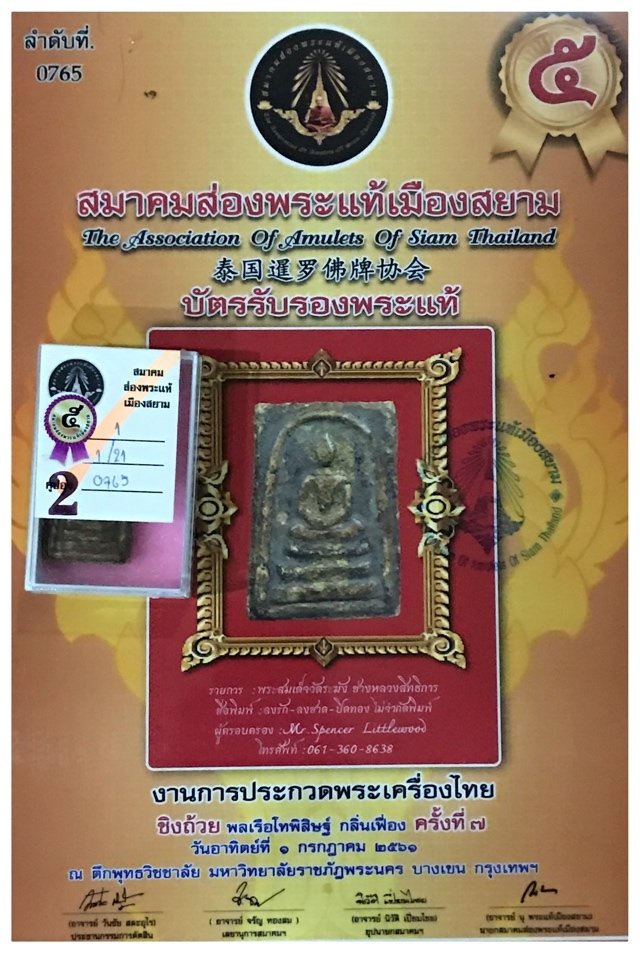 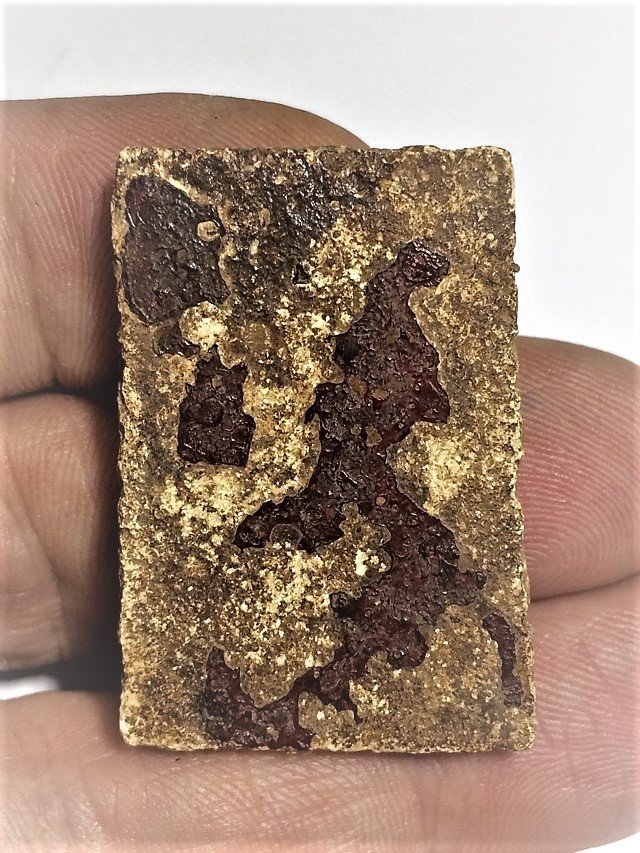 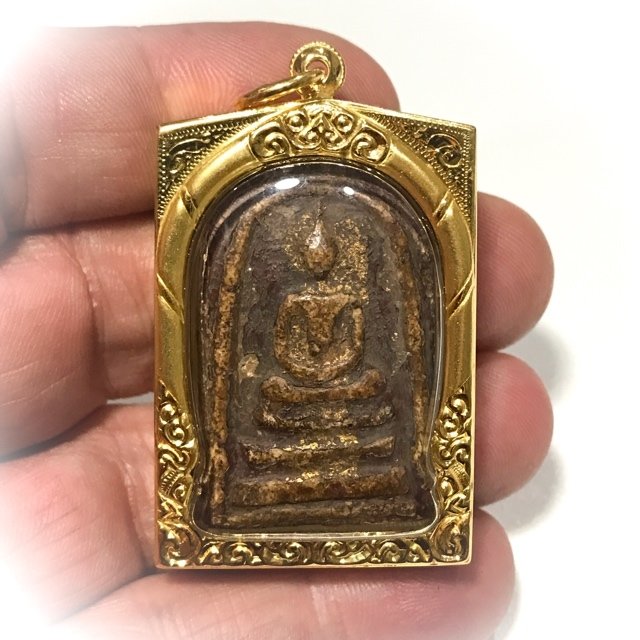 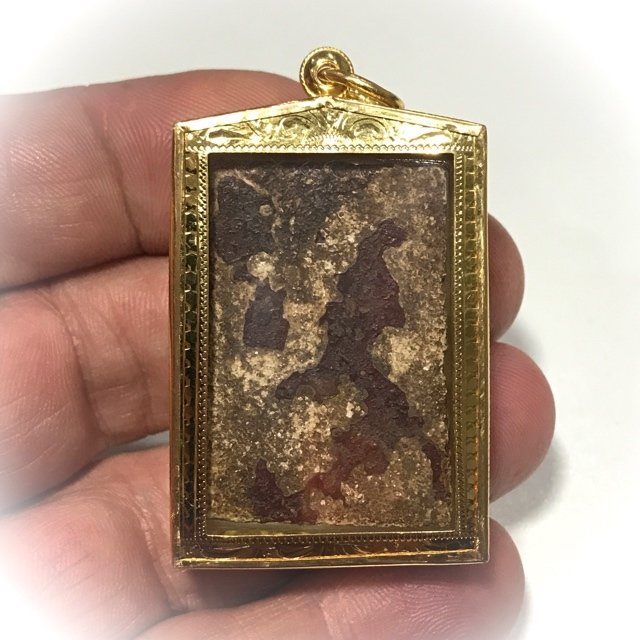 Below; Another example of a Pra Somdej Pim Gaes Jarod Sum Pim Chang Luang Sittigarn, this exhibit being without Lacquer and Gold Leaf (Cleaned version)

Below; The beauty of the sacred clay and the aged lacquer and gold leaf, and the character acquired through the process of natural aging over one and a half to two centuries, is an aspect of the Pra Somdej Wat rakang of Somdej Dto which is both inimitable, and part of what makes it the King of Amulets for true and avid students of the Thai Buddhist Amulet Scene 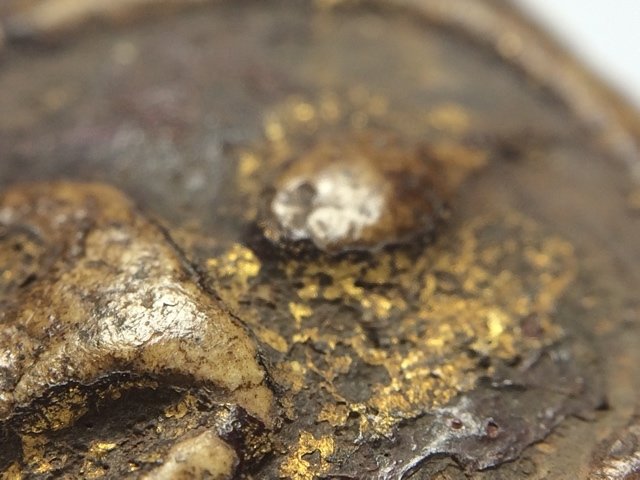 An Immortal Classic and one of the most famous Thai Buddhist Amulets of all time, as well as being amongst the top preferred amulets of the serious devotee and wealthy collector of the accepted amulets of Somdej Pra Puttajarn (Dto) Prohmrangsri, of Wat Rakang Kositaram, whose Pra Somdej are the number one amulets of all time, be they from Wat Rakang, Wat Bang Khun Prohm,or Wat Gaes Chaiyo. Made almost 2 centuries ago, the Pra Somdej Wat Rakang can be considered the number one amulet of all time in Thailand for its historical fame and legendry, and that of its maker. 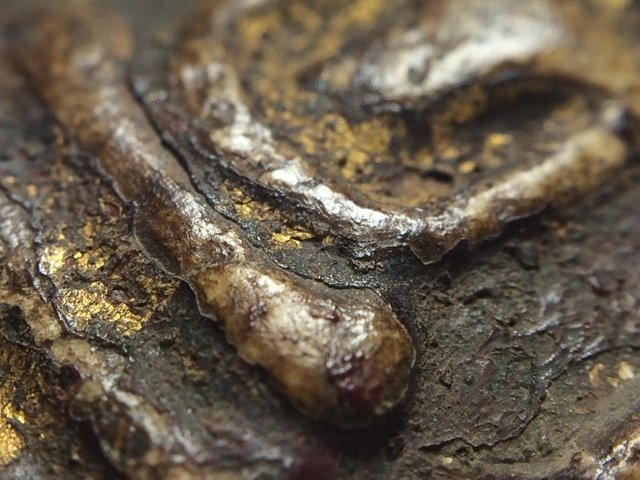 This amulet comes with its A4 size certificate of authenticity card of the Chomrom Pra Tae Mueang Siam Amulet Appreciation society and complimentary box with authenticity confirmation sticker. We offer free Gold Casing with this amulet, and Free EMS Shipping is also included in the price at no extra cost. 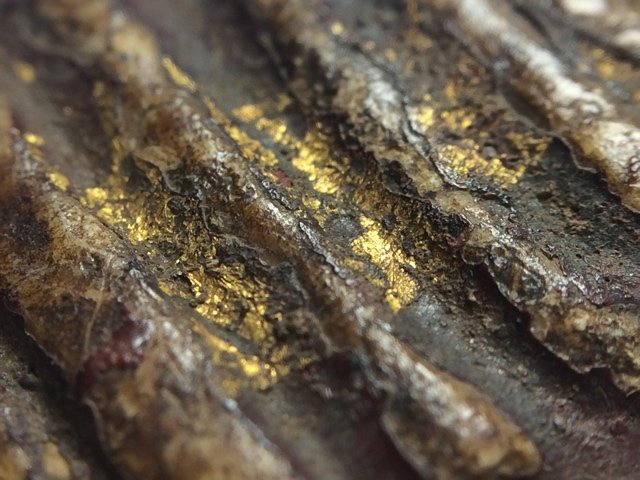 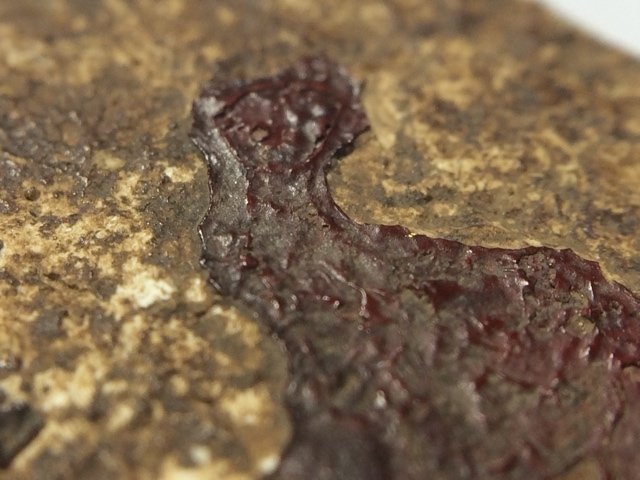 The contents of the Muan Sarn Sacred Clay reveal the necessary aspects and content expected from an authentic Pra Somdej Wat Rakang. The design of the front face is exquisite, as were all the block presses carved for Somdej Dto by the artisan Luang Sittigarn, one of the royal artisans of the Chang Sip Moo group of artisans. 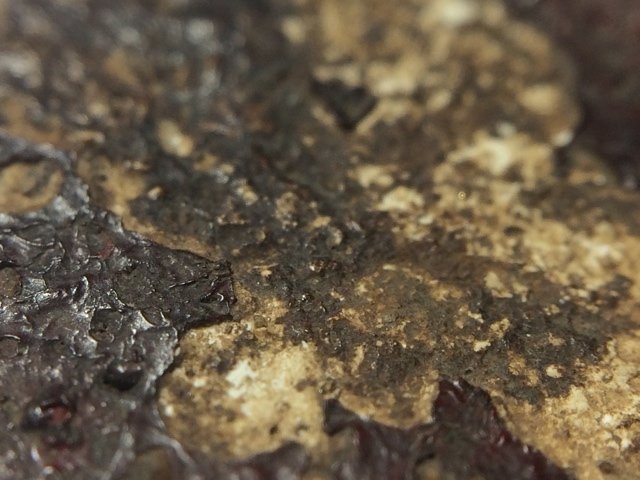 Pra Somdej Wat Rakang is one of the classic Pra Somdej amulets of Somdej Dto, along with Pra Somdej Wat Gaes Chaiyo, and the Pra Somdej Wat Bang Khun Prohm amulet as far as popularity, beauty, sacredness of Puttapisek ceremony and price range. Thereafter come other amulets which were found in the hiding place Kru chambers of various temples such as Wat sadter, Wat Tap Khaw, and Wat Kanlayanamit, which are despite their authenticity, much more affordable than those attributed to having been issued directly from Wat Rakang. 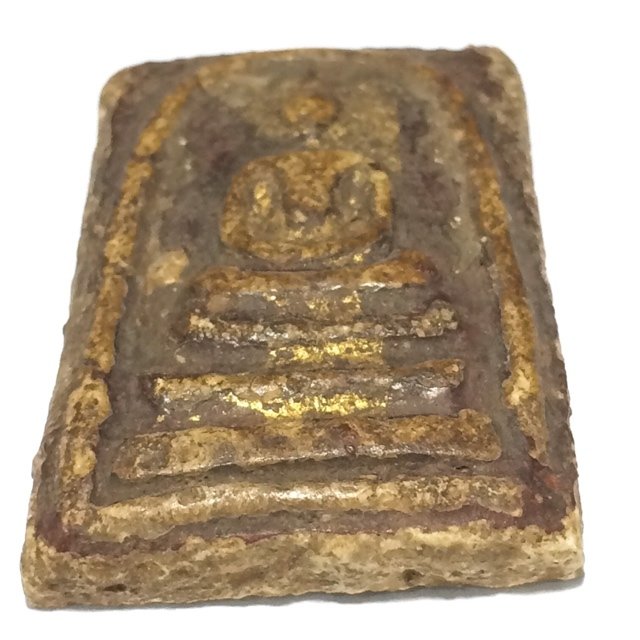 The Pra Somdej Wat Rakang, are considered to have extremely powerful Buddha magic in them due to the richness of sacred powders and powerful blessings contained within from great master Somdej Dto. Its general appearance is that of an oblong about 2.4 cm wide up to 4 cm high (varies between these sizes), made from white sacred powders mixed together. The Pra Somdej Wat Rakang Kositaram Pim Gaes Talu Sum is Similar to the Pra Somdej Pim Pra Pratan, but has the ‘Pra Gaes’ Topknot piercing the arch at the top of the amulet. The Pim Jarod Sum (this model) just touches the arch or approaches it.

Below: serious diligent study of the rubbly roughened edges and the hardness, and contraction over long periods of time becomes evident when examined under the eye loupe, authenticating the true agedness of the Pra Somdej, which is hard and dense as stone, which is impossible to reproduce with forgeries. 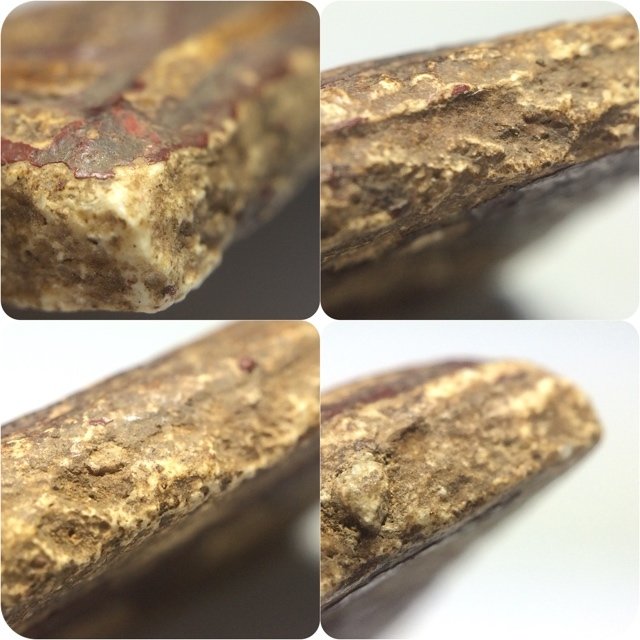 The main Ingredients of the amulets (Muan Sarn Samkan) were made from a base of sea shells, dried rice left from alms round, the five sacred magic powders of Somdej Dto, and ‘Nam Man Dtang Iw’ (special oil for mixing). Nam Man Dtang Iw (Tang Oil). 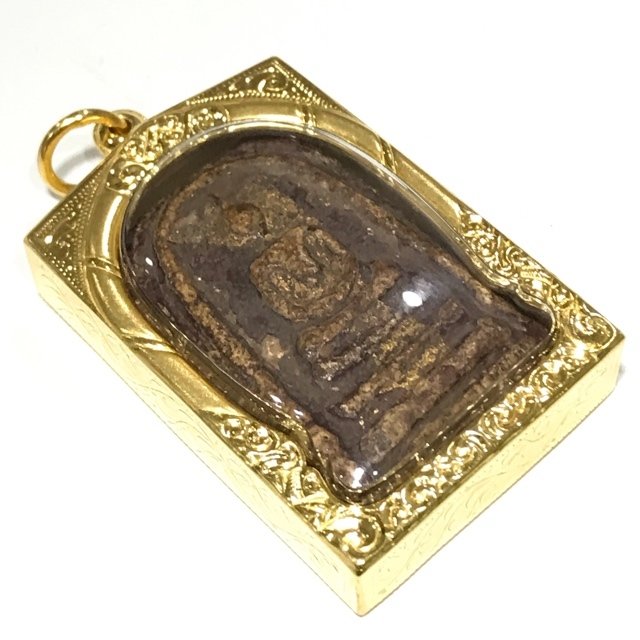 Tang Oil, 'Tung' Oil in English, is a preferred oil for mixing and curing amulets with, for it is superior to any other oil as far as water resistance is concerned (one reason why Pra Somdej amulets can be soaked in water without going soft). The oil is much more resistant to mold than its derivatives, such as linseed oil. 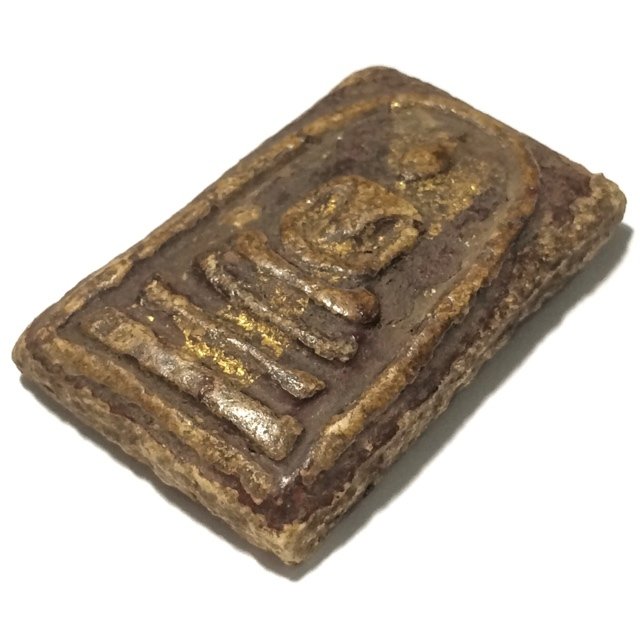 The Dtamra must be made by creating exactly 84,000 amulets, equal to the number of Suttas of the Tripitaka. There are different Pim Song (shapes and sizes) of Pra Somdej Wat Rakang, but those which are officially recognized and listed by the ‘wongarn Pra Krueang’ as far as Somdej Wat Rakang amulets are concerned, basically consist of the following officially recognised Pim of Pra Somdej amulets; Pim Pra Pratan, Pim Chedi, Pim Prok Po, Pim Gaes Bua Dtum, Pim Gaes Talu Sum, and Pim Thaan Saem. 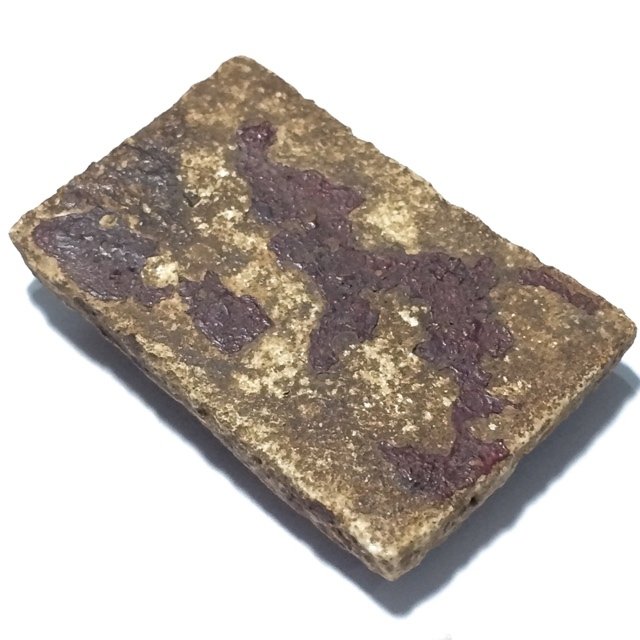 These Pim are then subdivided into various Block Press models and defined individually, for example with the Pim Yai, may be a Pim Yai Gaes Talu Sum, or a Pim Yai Gaes Jarod Sum, and so on. 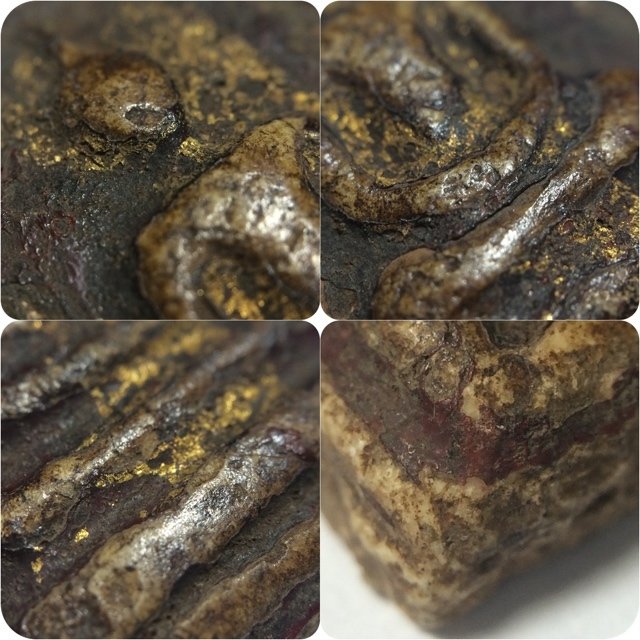 There are also many Pim which are so varied, that they enter one single category called 'Nork Pim' which means 'doesn't fit into any of the regulated categories'. But this does not mean that Nork Pim amulets are not authentic, rather, they are less expensive and less preferred by high end collectors due to the difficulty in defining each of the many unusal models which were made. 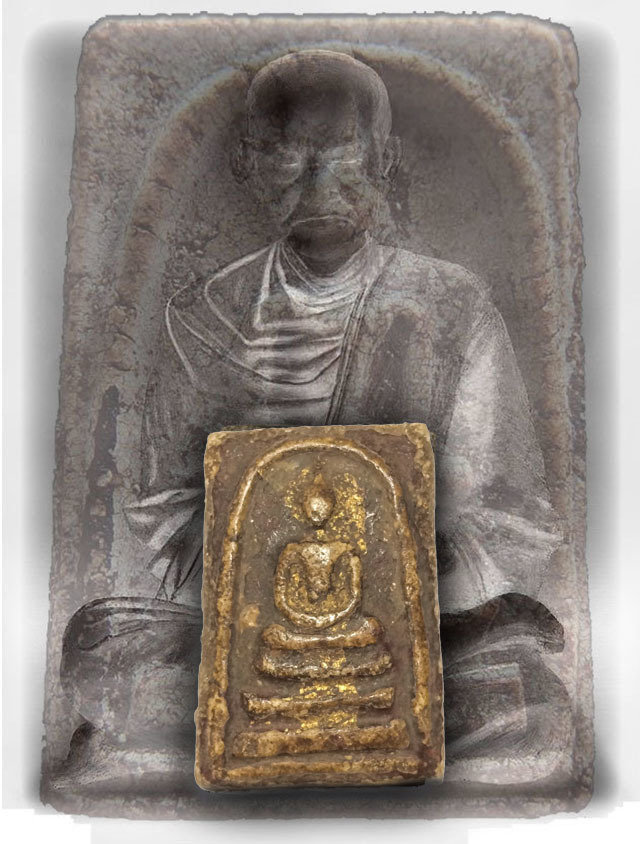 In fact, we hope to be also presenting some Nork Pim category amulets of various masters to show, for they are just as authentic and sacred, and powerfully blessed, as many of their much more expensive models. To name one example would be the Pra Somdej Gaes Chaiyo Pim Prok Po Dtum (button Bodhi leaves), of Somdej Dto, which is much more affordable than the Somdej Gaes Chaiyo Jet Chan or Hok Chan Niyom. 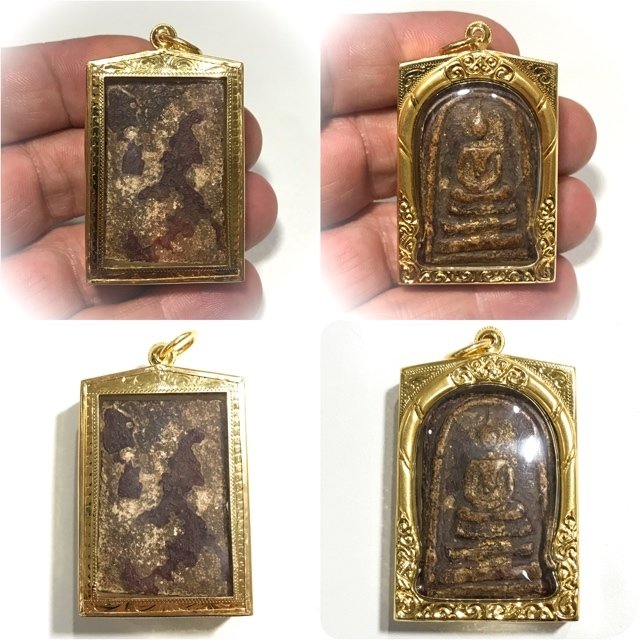 Nork Pim amulets are becoming slowly categorized and filed within the official pantheons of many amulet societies in the present day, which means that they will also become much more highly valued in the future, and attain similar prices as Pim Niyom Competition Class Models such as this one. 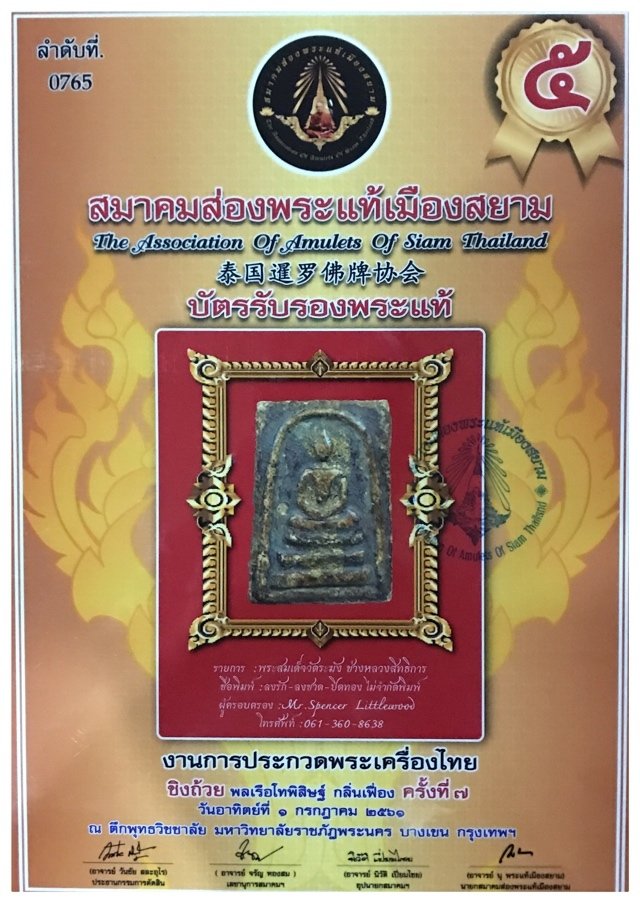 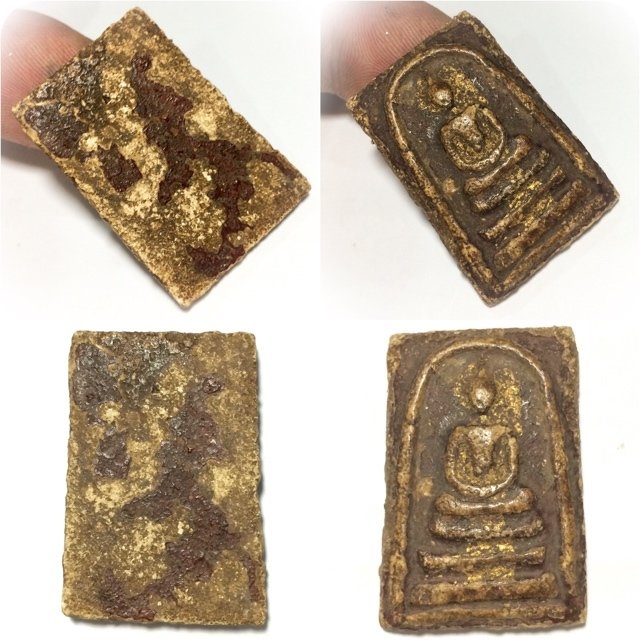