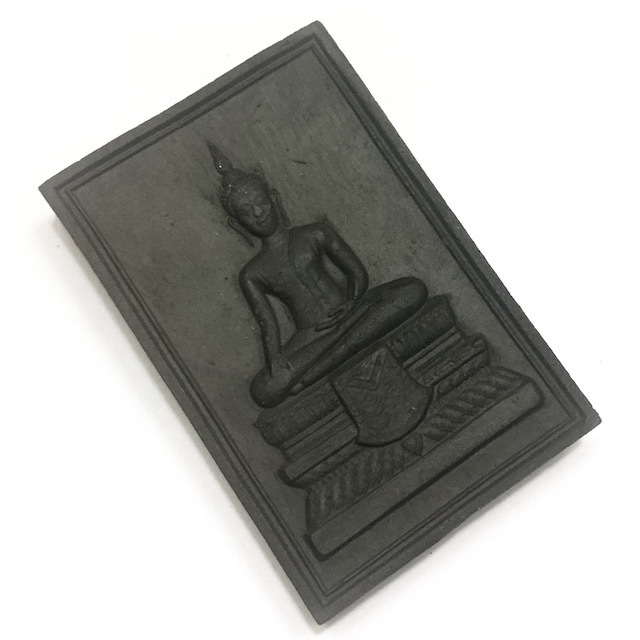 This first edition Pra Khun Phaen is an extremely rare amulet indeed, for which we are extremely proud to present it with clear images for your perusal and study, and for documentation for posterity. The Pra Khun Phaen is made from extremely coarse Pong Prai Kumarn powders, and is hand pressed.

This hand pressed early First Edition Pra Khun Phaen form this master, making this an exclusive amulet of classic status, that was only made in very small numbers, before Luang Por Dtat's powers became so widespread. 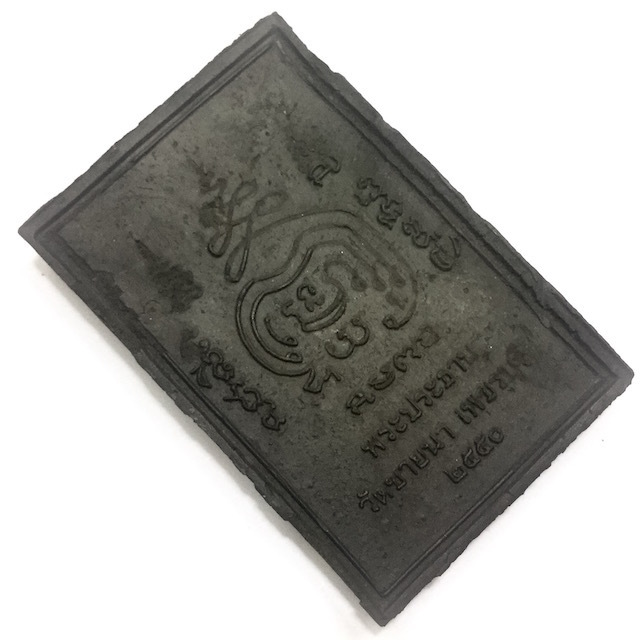 The rear face features the Yant Putsoorn, with the Kata 'Putta Sangmi', 'Na Chaa Lidti', and "Na Ma Pa Ta', and the Name of the temple of Wat Chai Na, and date of edition (2550 BE)

The front face of the Pra Somdej features the Pra Pratan, which is of course the Main Buddha of the Uposadha Shrineroom, Seated on a Dais, in the 'Victory over Mara' Posture, touching the Earth, to call the Mae Toranī Earth Goddess to Witness his Enlightenment, and wash away the Maras in a deluge. This now rare amulet from Luang Por Dtat, is in pristine condition, and has extremely well defined clear features. The amulets of Luang Por Dtat are now very rare to find, due to two major influential facts;

2. Only few amulets were made in each edition, which caused fast depletion of each edition, and rapid disappearance from the 'Sanam Pra' Amulet Marketplaces

The fine powder base of the black Bailan Sacred Parchment and Herbal Powders, with the five Special Pra Somdej Powders according to Dtamra Pra Somdej, are exqu isite, and contain an immense quantity of the fine soft black powders from ancient black bailan parchment grimoires, containing Buddhist Suttas and Magickal Incantations.

It can be said that few other masters who have passed away in the last 2 decades have generated such a fast depletion of his amulets by devotees as Luang Por Dtat, with the exception of perhaps Luang Phu Ka Long, and Luang Por Kambu. Because Luang Por Dtat did not produce massive quantities of amulets, is pantheon is also much more difficult to find all models anymore, making them rarer than those of some of his peers.

A great specialist in Takrut amulets, and Phalad Khiks, he is the creator of a vast range of different Takrut, as well as other amulets, including Pra Somdej, Pra Khun Phaen, and other Buddhist Votive Tablets.

Luang Por Dtat passed away in 2552 BE, leaving his Devotees devastated. His amulets depleted at the temple within a few months of his passing, and have now become an extreme rarity to find any at all. His leaden Takrut amulets are as legendary as his world famously powerful Palad Khik charms, Some of his tiger skin Takruts would also contain leaden Takrut concealed within the tiger skin too.

His Palad Khik, Takrut (special!!) and Pra Somdej Amulets are famous around the country and indeed the world.This 1st Edition Pra Khun Phaen is of course an extremely highly sought after item with Devotees of Luang Por Dtat's amulets, not only due to its rarity, but also its aesthetic appeal. LP Dtat was renowned for his great humility, and modesty.

He never presented stories of himself or made claims about his powers, or amulets. He would often play down his powers claiming to not possess any kind of ability, yet he was always seen to perform extremely diligent empowerments with high levels of concentration, in contradiction to is modest claims. In addition, the many stories of Klaew Klaad Lifesaving Miracles occurring with Devotees who wore, and still wear his amulets, have also served to substantiate the widespread belief in the powers of his amulets.