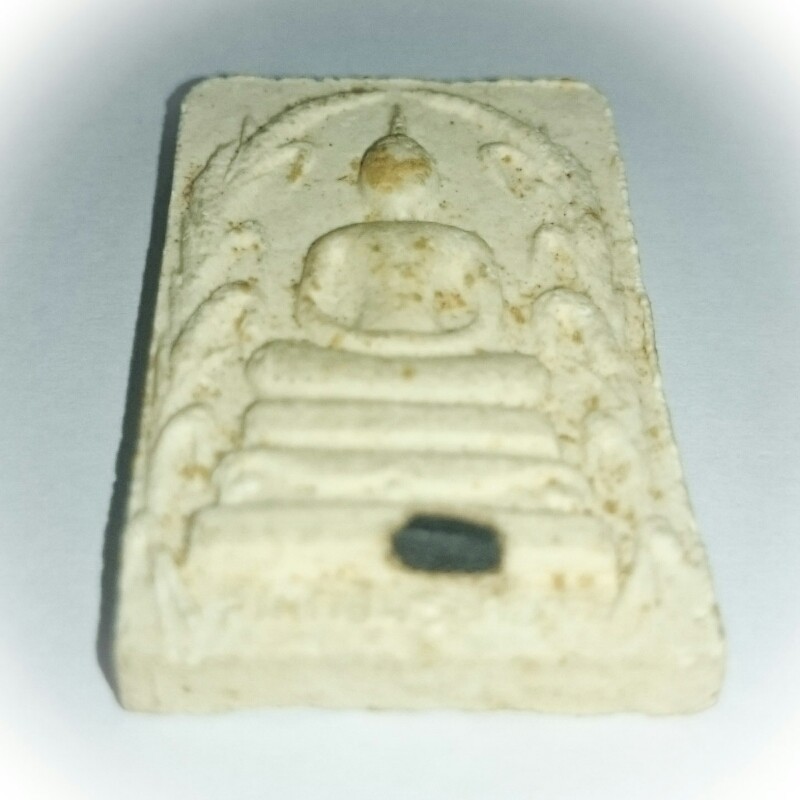 Pra Somdej Matupayas Fang Khaw Plueak Nuea Pong Puttakun 2521 BE - Sacred Powder Buddha Image with Blesséd Rice Grain inserted from wat Samakee Pracharam, in Banglamung, Chonburi Province. The amulet is made from Nuea Pong Puttakun, and features a Buddha Image with an elongated and elegant 'Pra Gaes' Topknot, which rises up to touch the 'Sum' Arch.

The arch which contains the Buddha Image is decorated with sheapf os rice plant leaves leaning inwards, and represent the prosperous harvest imbuing the amulet with high Maha Pokasap Prosperity Blessings. To increase the Maha pokasap effect, a sacred blessed rice graiin of 'Khaw Plueak' Organic Rice is embedded into the Dais on which the Buddha is Residing. 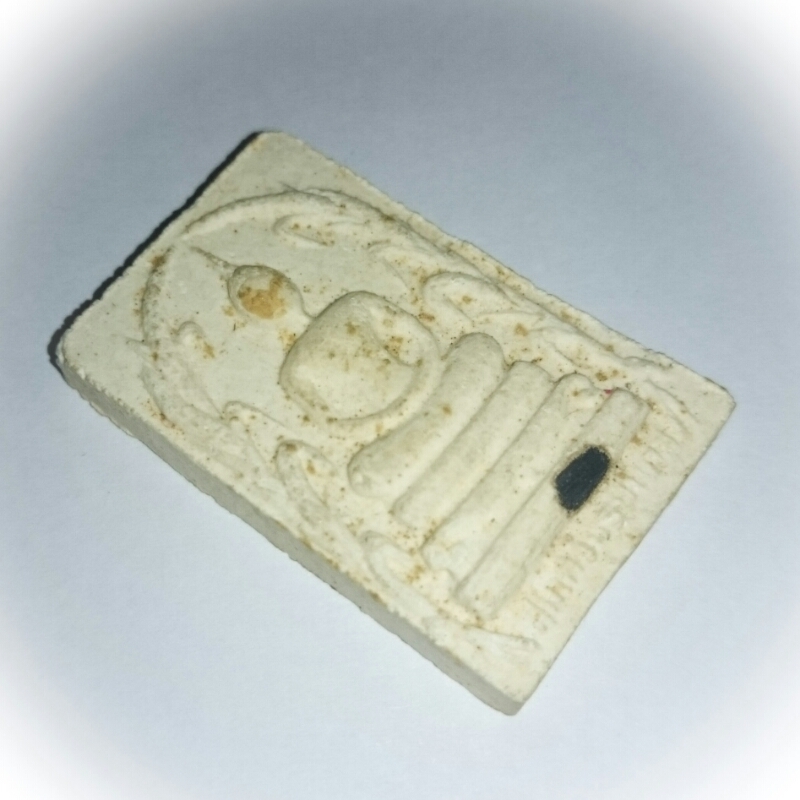 The Buddha is seated on a three tiered Dais in the posture of Khad Samati Raab' (Meditation). The torso is styled as 'Ok Grabork' cylindrical torso. The head has the classic 'Hua Mai Kheed' matchstick head shape, which is an extremely beautiful elongated oval shape. The depth of relief of this particular Pra Somdej Buddha Image is very well defined, and attractive for its high definition, thowing enough shadow to accentuate its beautiful features from a distance. 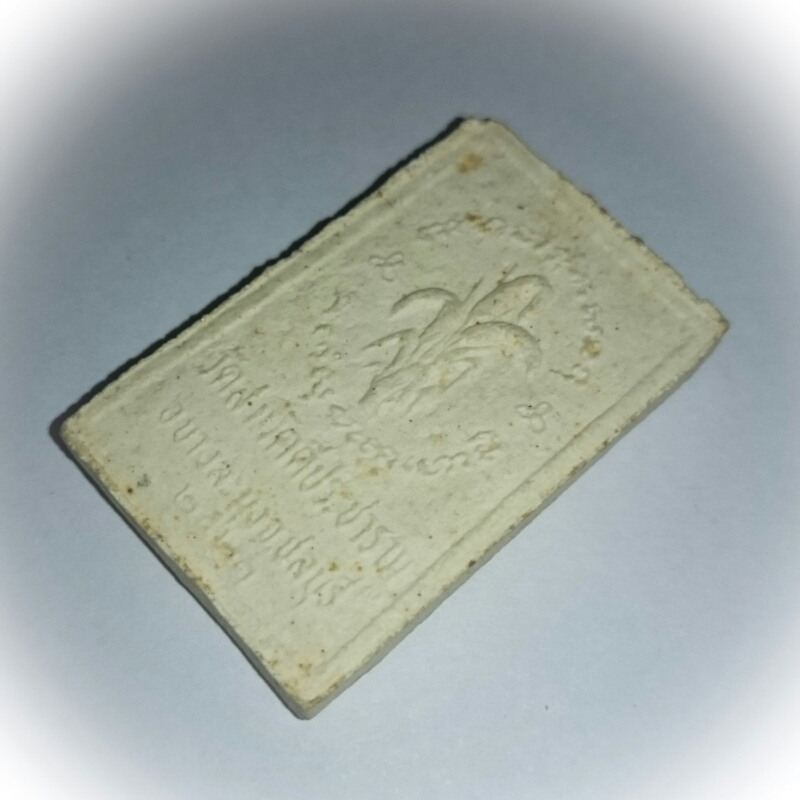 This is a very eyecatching and unusual Pra Somdej to say the least, and attracts the eye without effort. A most enticing amulet for collectors who love Pra Somdej, and who appreciate originality and seek something unusual to stand apart from the crowd with. 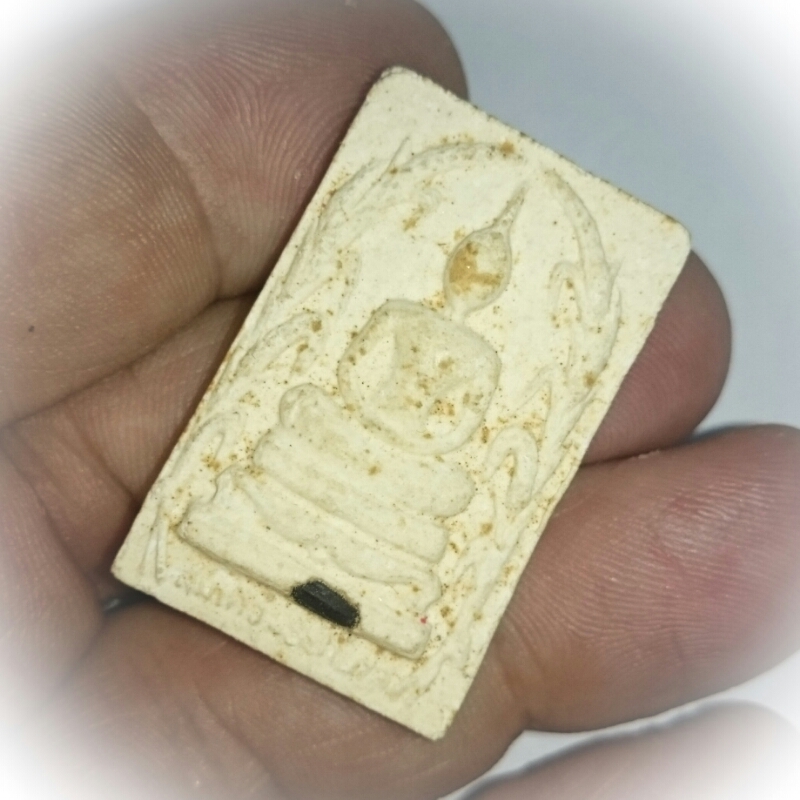 Its sacredness is unquestioned as a member of the Pra Somdej benjapakee class of amulets. its Muan sarn sacred Powders are visibly rich in Puttakun Powders, and the presence of sacred 'Kraap' Mildew formations only serves to increase its attractiveness and proves its sacred Power within.

Released in Buddha Abhiseka Blessing Ceremony at wat Samakee Pracharam in Amper Bang Lamung, Chonburi in the year 2521 Buddhist era. The rear face features a sheaf of wheat invoking the Harvest Deity Pra Mae Posop, to bring Prosperity and repeated successful harvests for each year of Life and in Business repeatedly year after year without fail. The amulet provides hence not only the usual Serm Duang Karma Improving Blessings and Klaew Klaad evasion of deadly dangers, and Metta Mahaniyom Compassionate Mercy, but also the Blessings of Maha Pokasap Prosperity.

Around the Sheaf of Wheat, are two Buddhist Kata, which you can chant for Bucha to thie Amulet and to beseech the blessings in the Kata from the Amulet

The Kata on the top of the rear face reads; พา มา นา อุ กะ สะ นะ ทุ = Paa Maa Naa U - Ga Sa Na Tu. This is the abbreviated heart Mantra of the Pahung Kata which in its long version is the Chant which recounts the Buddha's Victory over the Armies of Mara, known as 'Kata Pahung'. It brings all forms of Buddhist Blessings including Prosperity, Safety from Accidents and mara Beings and Demons, and brings Elevated Status both Socially and Professionally (Promotion).

The Kata which resides on the bottom half of the amulet under the wheat sheaf, reads อหัง สุขิโต โหมิ = "Ahang Sukhidto Homi" and means 'Please Let me Be Happy'. The Blessings recieved from this Kata are obvious, namely Happiness and Liberation from falling into States of Suffering. 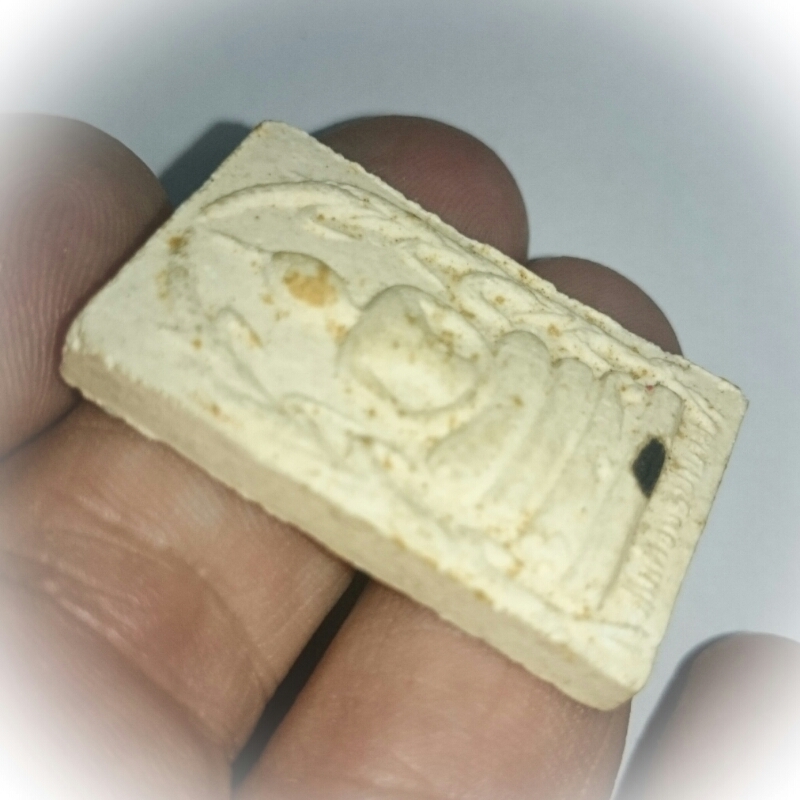