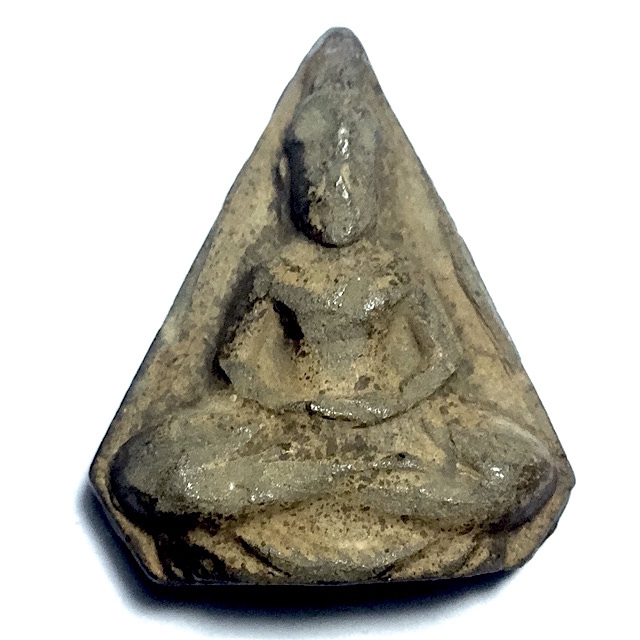 Pra Po Jak Bai Po Pim Ha Liam Pang Samati is one of the more famously renowned and well known amulets of the Pantheon of Pra Niyom category amulets made by the Great Luang Por Lee, of Wat Asokaram. This model measures 2.8 x 2.2 Cm, and is made from Nuea Din Phao See Pan, which is a very rare version in these ochre-green-brown coloured Sacred baked clay.

The front face features the Budda seated in meditation, with a curved mat protruding out from under the Buddha. The Buddha has clasped hands and sits within a five sided triangular frame, with some thin lines radiating out from the Buddha, which are in fact, the veins of a Bodhi Leaf. 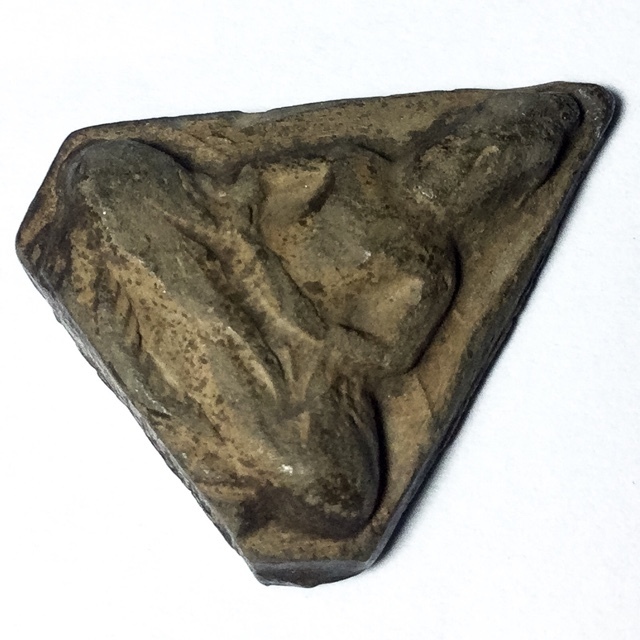 This 'Pim' is famously known around the world, and is even recognised by people who are not amulet aficionados, for it has graced the pages of so many encyclopaedic works on amulets, that it has been seen by the eyes of many a person who stopped at the newsagent to buy something, and looked at the magazine stand as they waited for service.

The rear face of the amulet has a beautiful glistening sheen to it when the light falls on it, due to the Nature of this particular rare Muan Sarn Clay, and also due to the effects of atmospheric changes, drying and hardening and the contraction of the porous spaces between the particles of Muan Sarn Sacred Powder over the years. 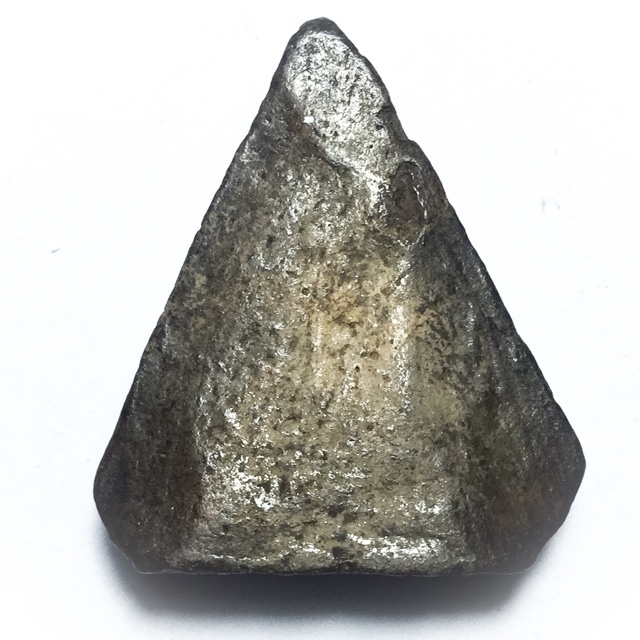 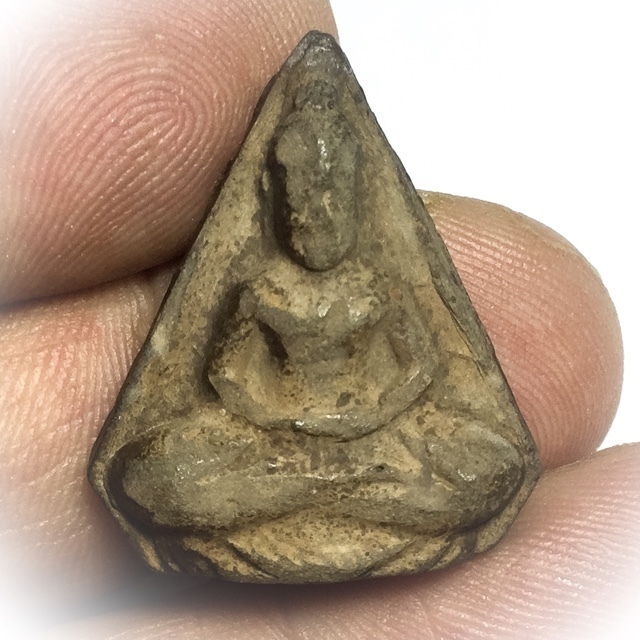 The rear face reveals true depth and character and authentic Muan Sarn Sacred Powders present within the clay. This exhibit is indeed a beautiful example, with classic features. 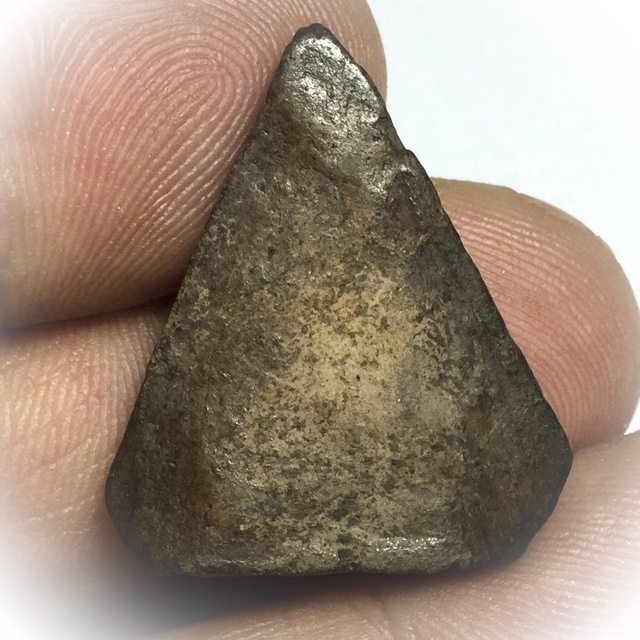 There are also some very rare versions of the Pra Po Jak amulets, such as the Khorb Tong model (Golden Edges Pim), which has golden or orange flamed markings on a predominantly darker main surface area.

In addition there were many slight variations, due to the final stages before the beginning of the blessing ceremony, as time was running out, more and more devotees were called upon to help press the amulets, to get the finished before Luang Por Lee performed the blessing and empowerment. 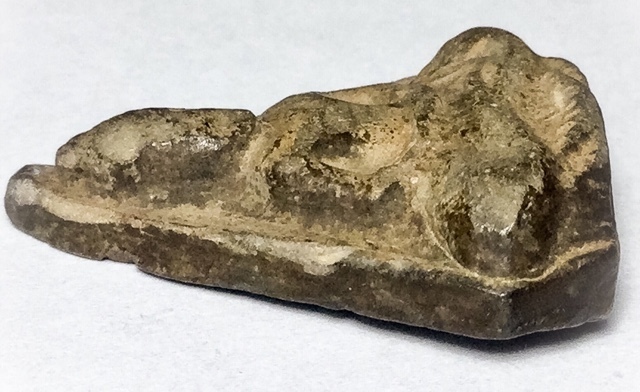 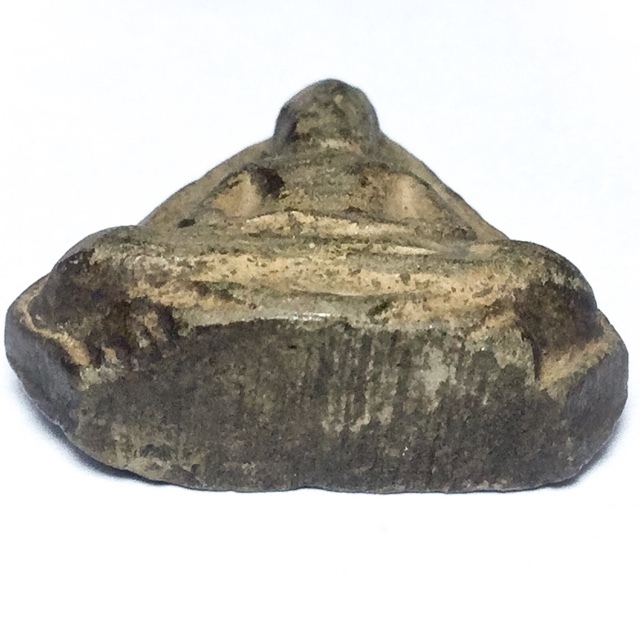 This amulet is extremely popular in all its different versions, and already tried and tested, and accepted for its power, not only by Thai Buddhists, but by devotees of Luang Por Lee and his amulets, around the world.

The amulets of Luang Por Lee are becoming ever harder to find these days. Because of the large number of students and followers of the teachings of Luang Por Lee, his amulets are especially rare to come by. 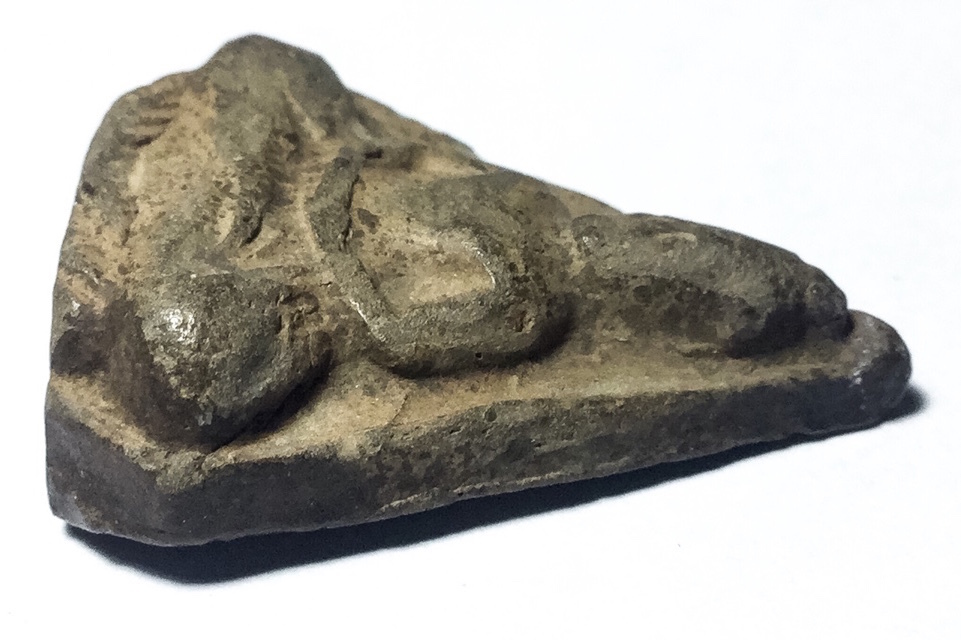 The are widely collected first and foremost, because of the Guru Monk who made them, and in addition, are collected avidly by those who seek the famous Klaew Klaad Kong Grapan Chadtri magic of these amulets. 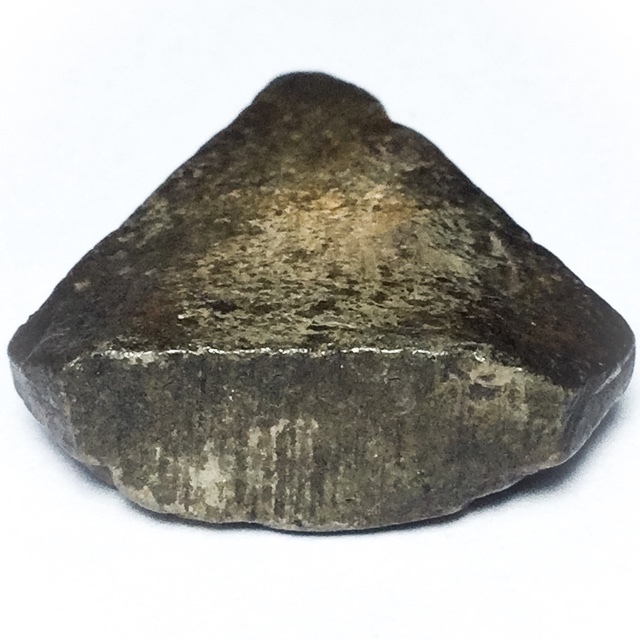 They have enjoyed the honourable status of Pra Niyom category for many years already, but in recent times, his amulets have risen to even higher importance than before, and this trend does not seem to be slowing down.

We have hence decided to begin to present those few remaining amulets of this great Master we can find available, for your enjoyment and perusal. 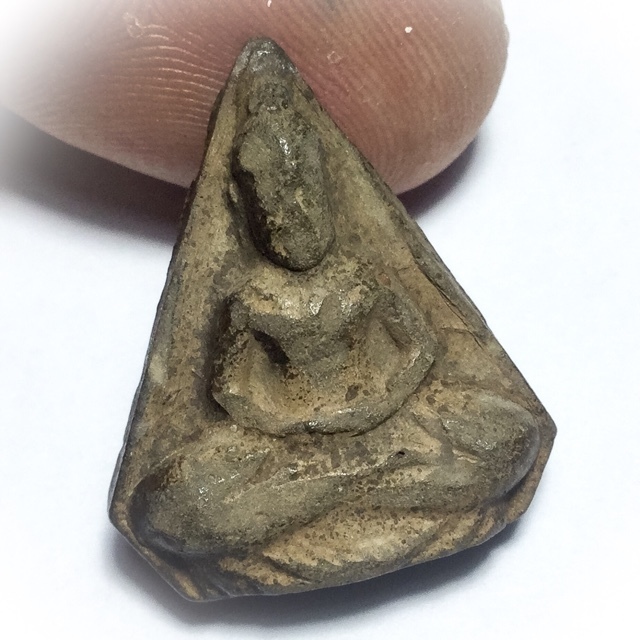 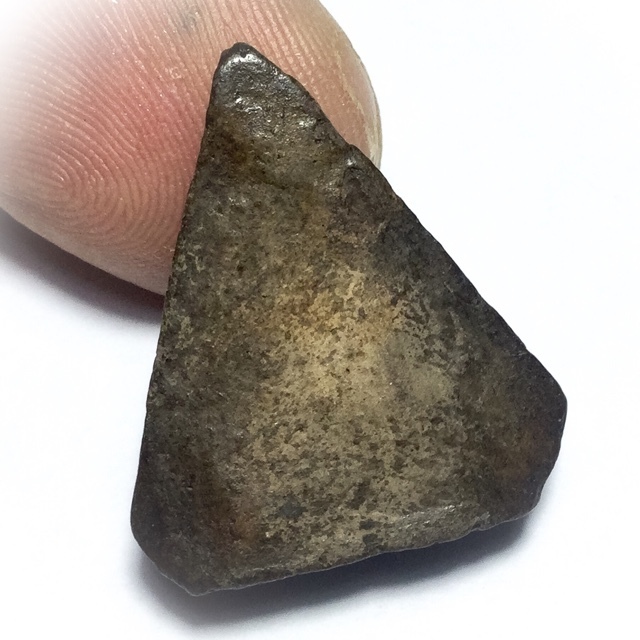 His teachings were so great, that they inspired and led some of the great Masters of the present day and recent past. This includes some of the top living Masters in the western world also, such as Thanissaro Bhikkhu, Ajarn Amaro, and Ajarn Sumedho. 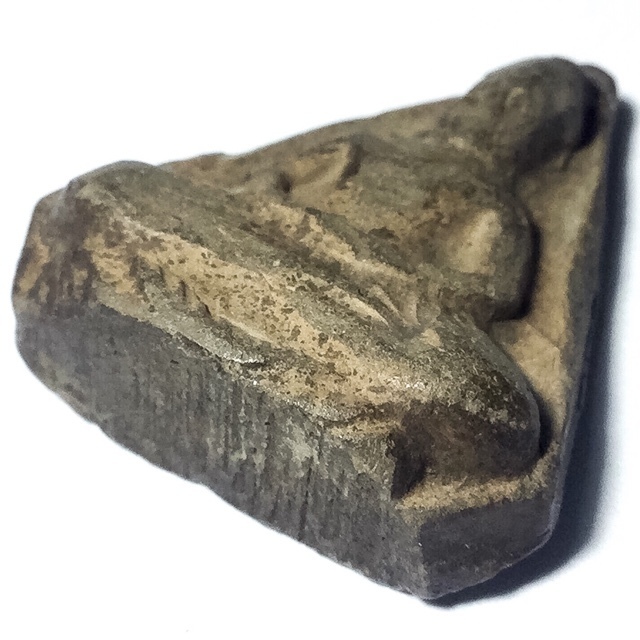 Luang Por Lee began to make amulets at Wat Pha Klong Kung around 2496 BE, and used a design he had obtained from his visit to India, as the model to carve the block press molds from. The original images were from two different carved Buddha images which Luang Por Lee had from India which were carved in Ivory. 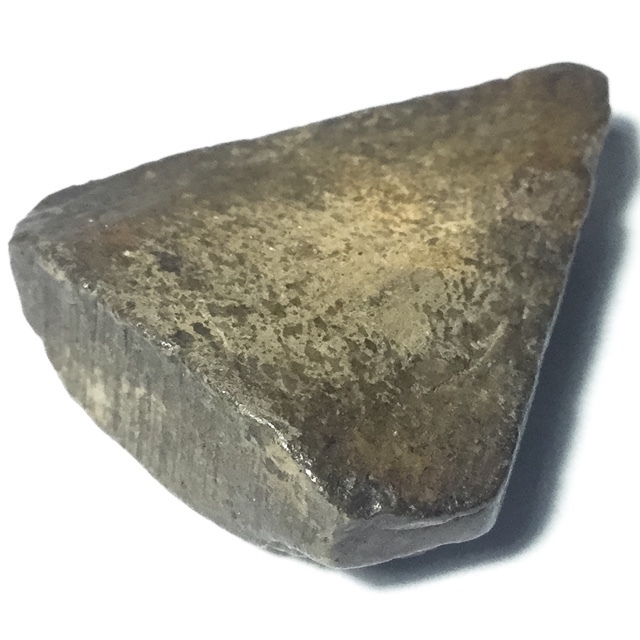 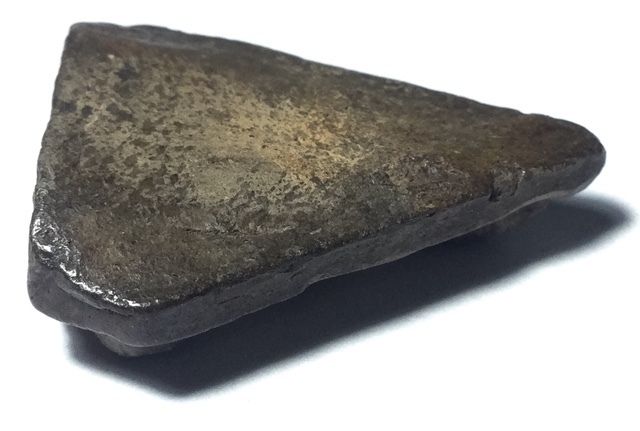 The large Bodhi shaped model of this series was made with no Yant Puttajak (four Khom letters) on the front face, just smooth surface with leaf veins (Hlang Riap). However one can stil find variations in authentic models. There were also these cut-out models, which were cut around the Buddha image into a five sided triangular shaped amulet, which became known as the 'Pra Po Jak Pim Ha Liam'. 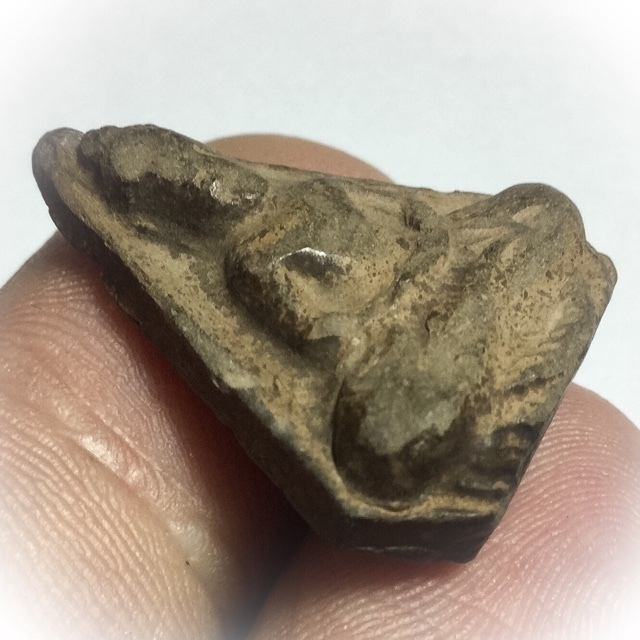 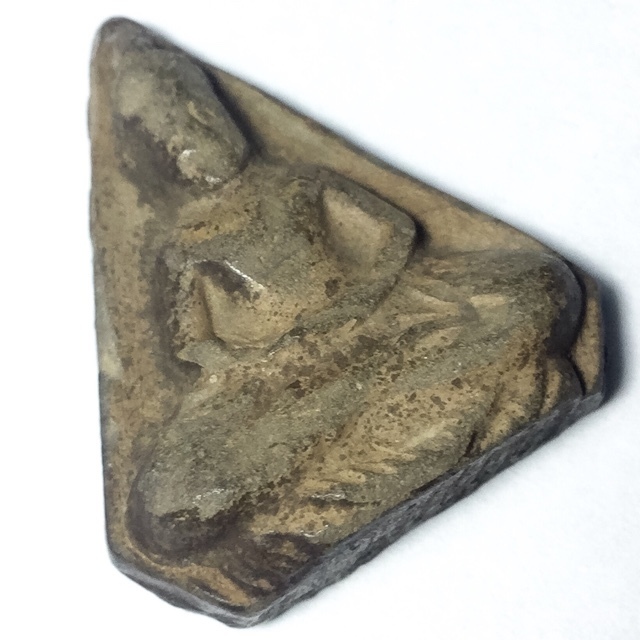 He mixed those with 108 kinds of Gesorn (flower pollens), and flowers from the monks praying to the Buddha. The powders were mixed with 100 year old prayer water from Prajinburi, and baked. 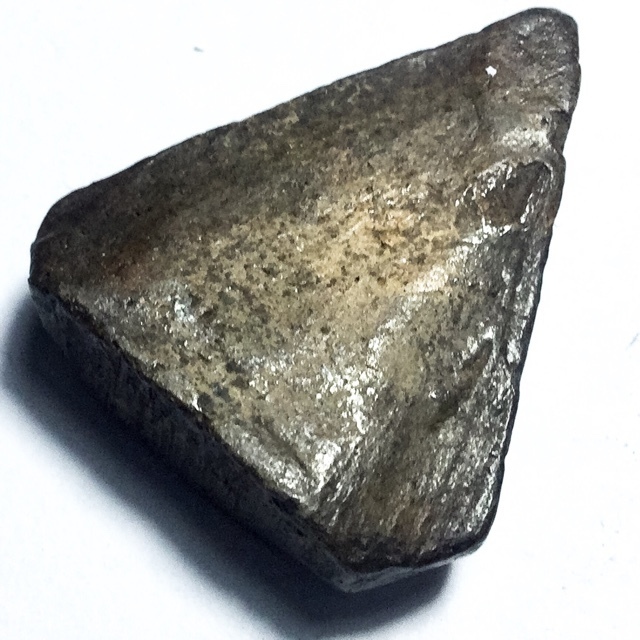 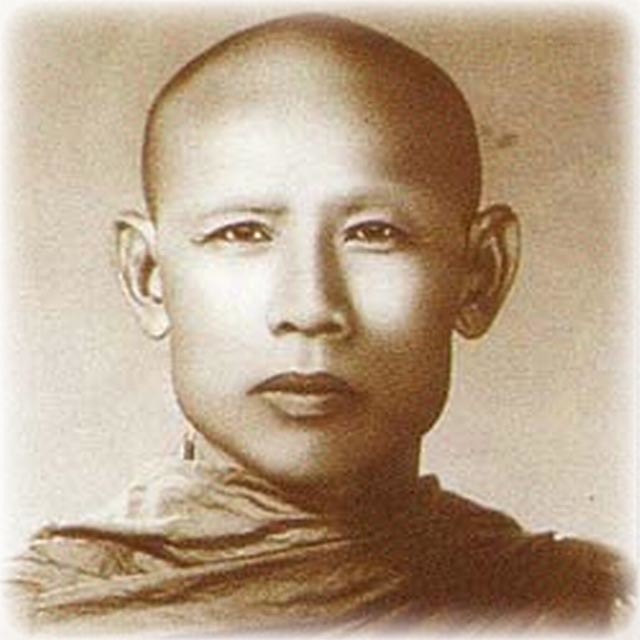 Luang Por Lee Tammataro was a direct lineage Looksit of the Great Ajarn Mun, and one of the great Masters and Teachers of the Kammathana Thai Forest Tradition Buddhist path, and a Great Kroo Ba Ajarn to thousands of Devotees around the world. One of the most important Masters of Thai Kammathana Buddhist path Teachings in all History. Luang Por Lee created the Pra Po Bai Jak amulets for empowerment in the 2500 BE 25 Centuries of Buddhism mega-Ceremony which is classed as the third largest and most important mass blessing ceremony in all of history 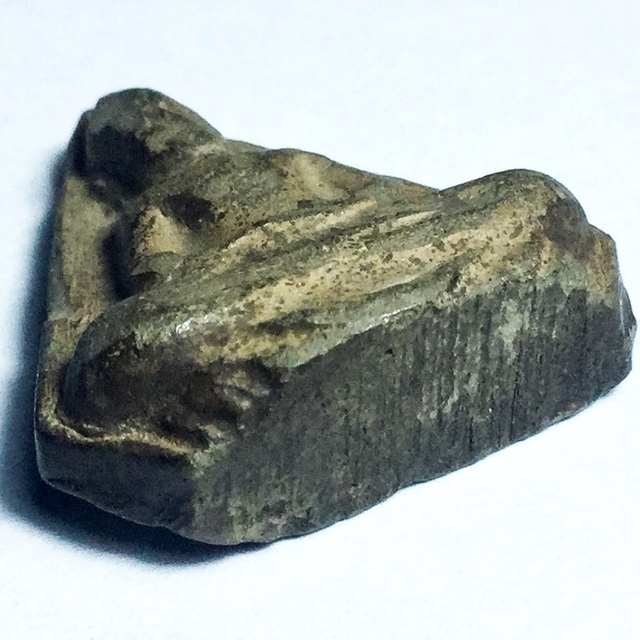 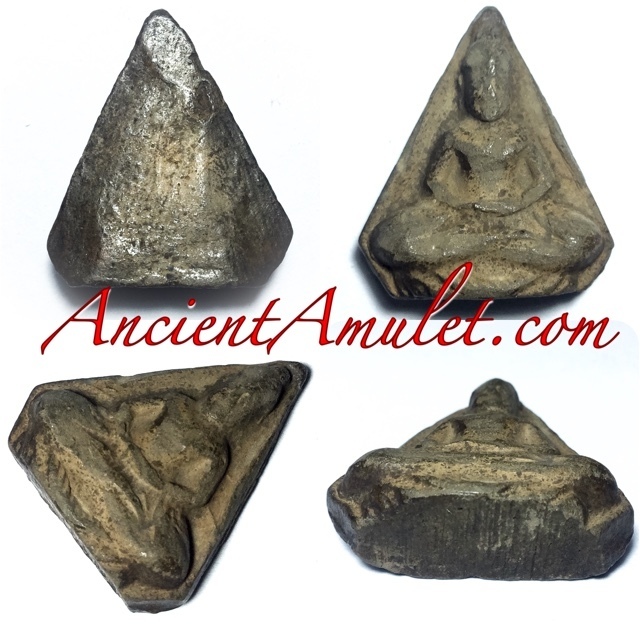