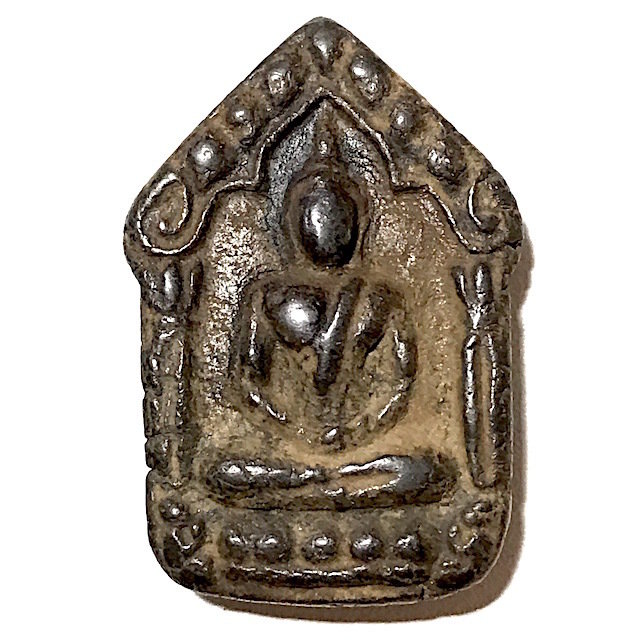 This amulet comes with official authenticity certificate from the Luead Ban Kaay Luang Phu Tim Association of Rayong, with signature of confirmation from Dr. Ajarn Pisek. 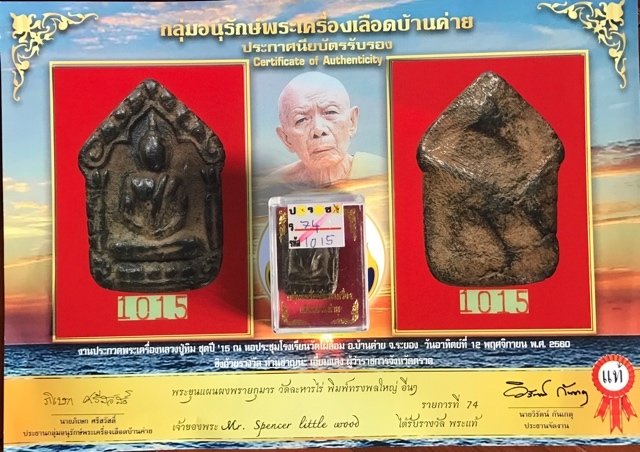 A truly rare hand pressed amulet of eminent status for its long history and early era status. The thumbprints from the authentic olden days hand pressing and the more simple features of the design, which reveal the amulet being pressed using the hand carved wooden Mai Takian Block Press. 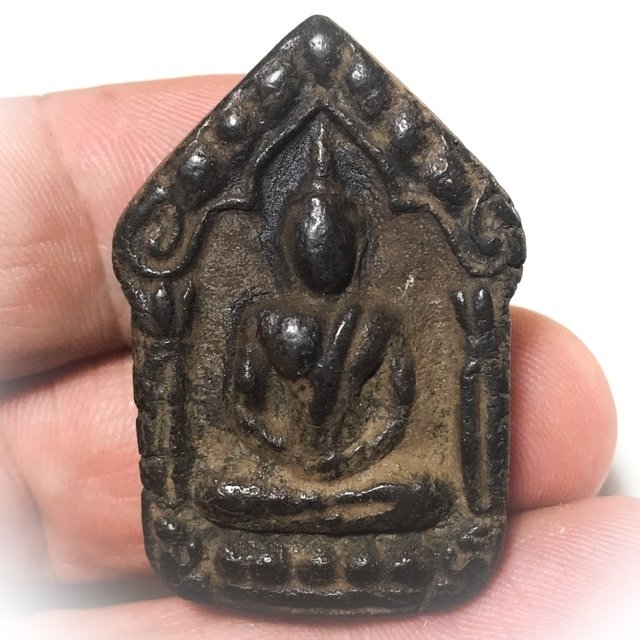 Visually, this type of sacred clay has a very soft and subtle appearance, but which further observation under the eye loupe reveals true depth and dimension, and is full of the classic characteristics of Wan Plai Dam with Pong Prai Kumarn, and a true Pra Khun Phaen Luang Phu Tim Block Mai Takian 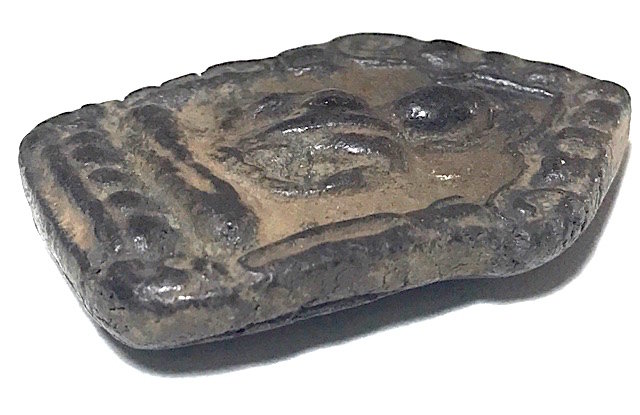 An extremely rare acquisition for any true devotee and avid collector of the Pra Khun Phaen Pong Prai Kumarn of Luang Phu Tim, and those who like to collect the full pantheon for their showcases. 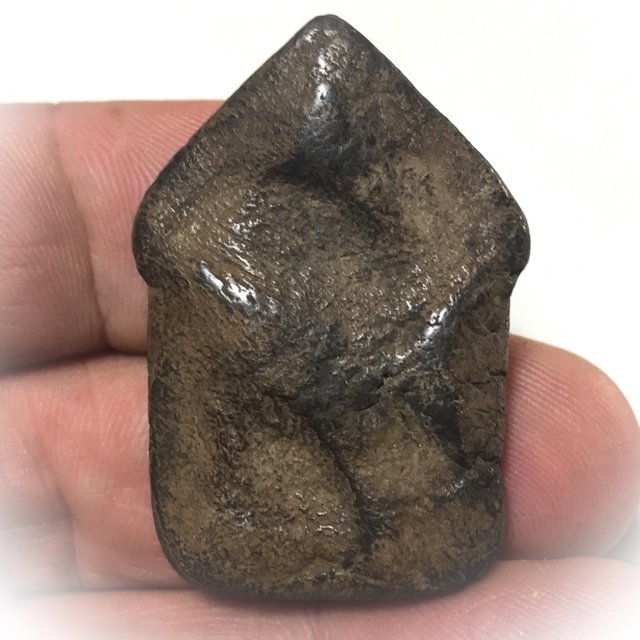 Extremely Sacred and Undoubtably Powerful, coming from the era where Luang Phu was less famous and much more intensively involved in the pressing of the amulets.

The Nuea Wan Plai Dam is known for its Maha Sanaeh and its Kong Grapan Chadtri Powers, as well as for immense Siang Choke Maha Lap for Gamblers and Speculative Risk Investors to increase their good fortunes. 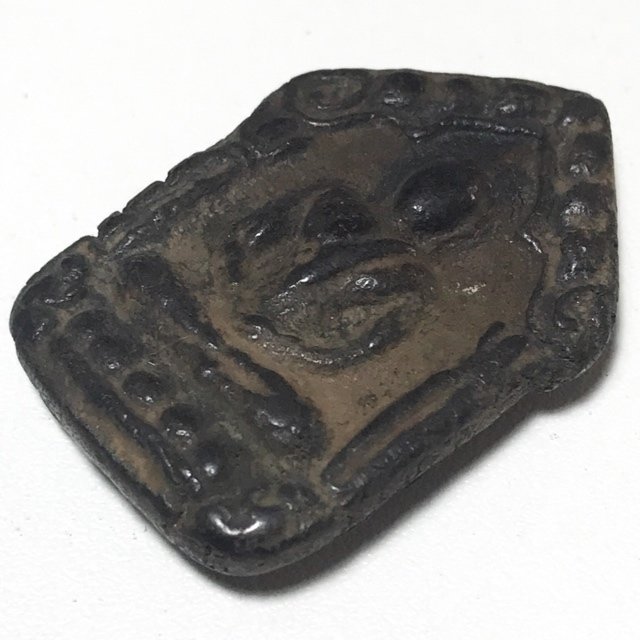 The Pra Khun Phaen Block Mai Takian has a much less detailed carving than the Block Hin meed Gone or the Block Tong Hlueang (Block 2), but despite lesser refinement in design features, the amulet has equal level of preference and its own grooups of devotees and collectors, for the charm and spiritual power associated with`the hand pressing and personal touch given by Luang Phu Tim to the Block Mai Takian series, and the fact that they are amongst the first Pra Khun Phaen amulets made by Luang Phu. 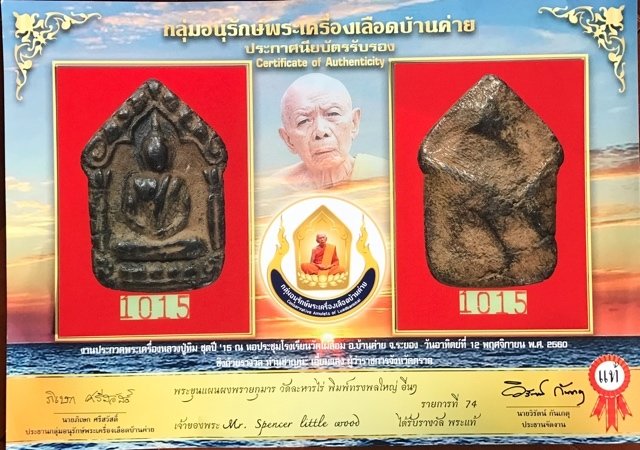 This exhibit is in extremely well preserved condition, with extremely clear cut features, and most certainly worthy of show in any of the allocated competitions of its genre.his exhibit has already received its authenticity certificate of the Luead Ban Kay amulet association in Rayong in 2560 BE, and is hence admissible in competitions of its Genre, and highly eligible for prize winning if such were of further interest to the owner. 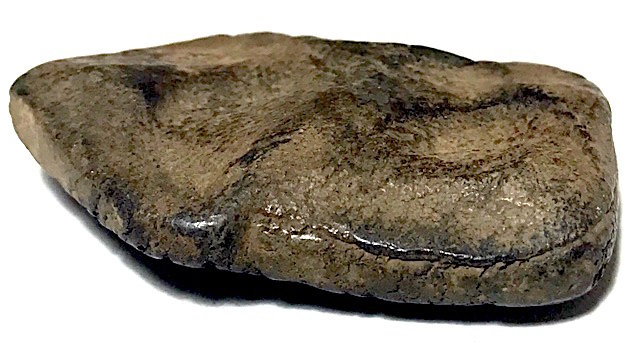 Close perusal under the eye loupe reveals the amulet to be made from a base of Nuea Pong Wan Plai Dam with Pong Prai Kumarn, and has a very high Muan Sarn Concentrate. This is a most Powerful Muan Sarn filled with Maha Sanaeh, Maha Lap, Maha Pokasap and Kong Grapan. 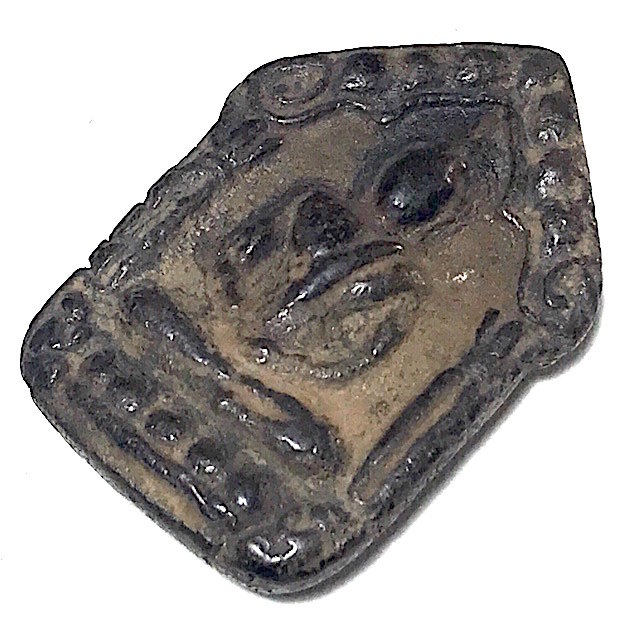 Below; A Podcast from the 'Amulet Talk' Series, talking about the 2515 BE Edition Block 2 Pra Khun Phaen Pong Prai Kumarn of Luang Phu Tim, another top preferred and now becoming the number one amulet of the Muan Sarn Sacred Powders type amulets of Luang Phu Tim, since the Block 2 2515 BE series overtook the popularity of the Block Raek 2517 BE series

The Sacred Pra Khun Phaen Pong Prai Kumarn of the Great Luang Phu Tim of Wat Laharn Rai is one of the most famous amulets of all time, and highly renowned for its true power to bring prosperity and good business, power of attraction and mercy charm to the wearer. We guarantee authenticity with this item, as we do with all amulets in our showroom. The reason the Pra Khun Phaen amulets of Luang Phu Tim became so world famous and popular, even in the time when Luang PhuTim was still alive, is because everybody who owned one, recounted that business and personal success and prosperity had increased constantly and steadily since wearing the amulet. This particular exhibit has easily recognizable features of the Block Mai Takian wooden carved block press, and is 'Ongk Kroo Doo Ngaay' - easily identifiable for its classic appearance, with no visual discrepancies, and the evident presence of authentic Muan Sarn of Luang Phu Tim. 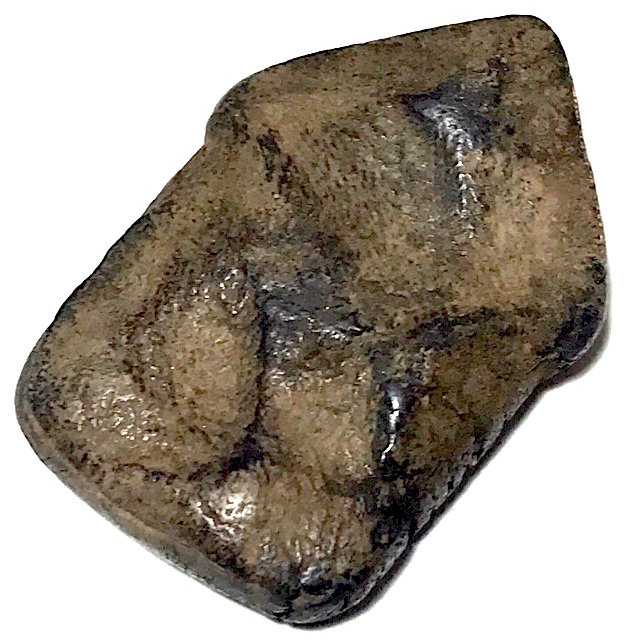 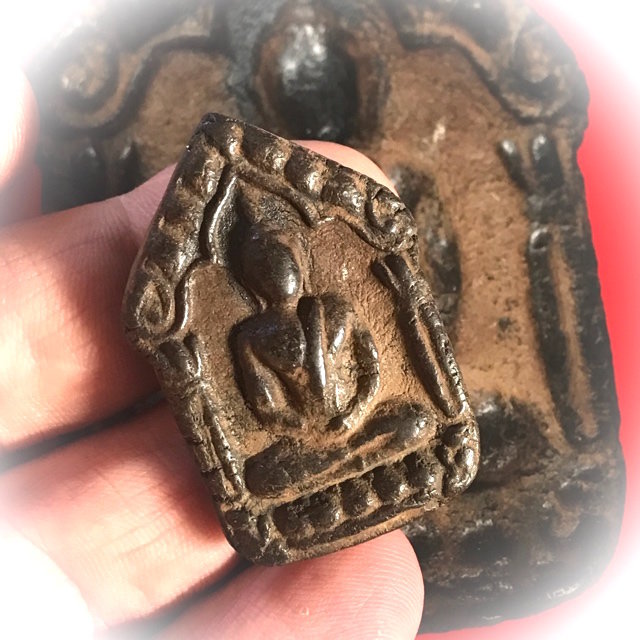 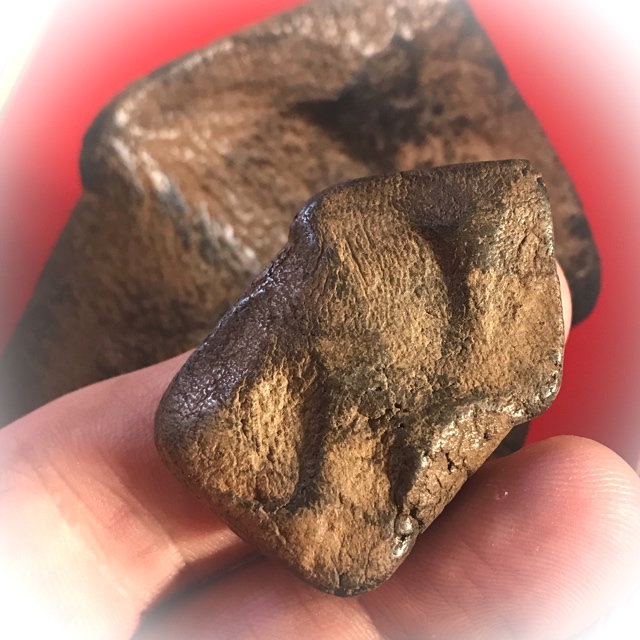 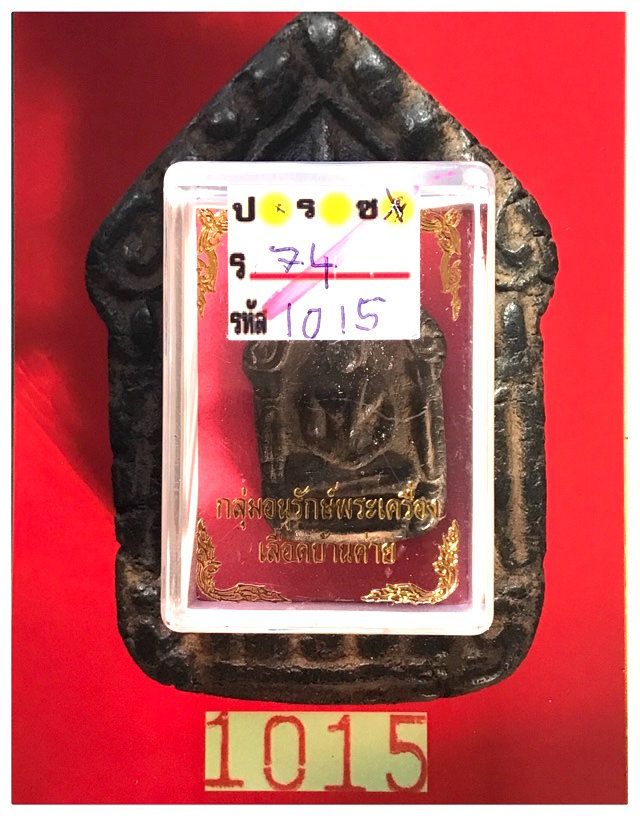 We ourselves feel that all of Luang Phu Tim's amulets are equally Sacred and Powerful in their own way, regardless of which edition or which temple he blessed them at (or how high or low their prices are), but we do, as do all Amulet Appreciation Fanatics, recognise the categories of preference within the hierarchies of different editions, which is for us one of the more subtle and fascinating parts of the study of high end amulets within the collector scene, and part of the fine art of learning how to recognise and value Sacred Amulets of High Preference and Rarity. 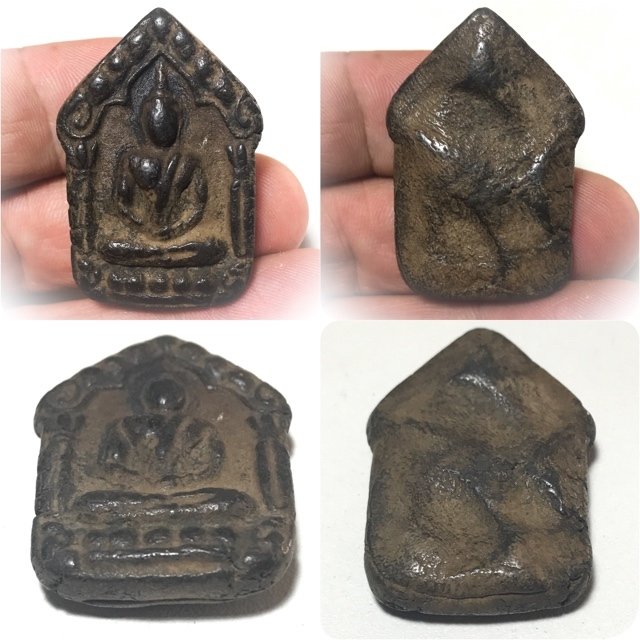