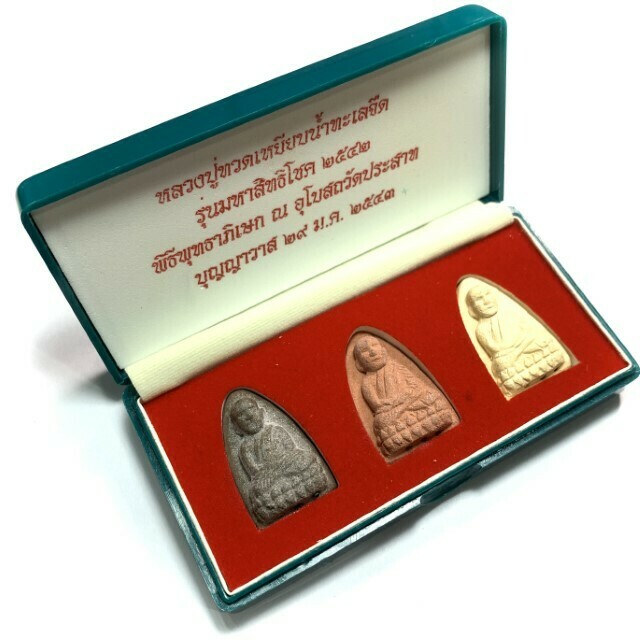 Pra Chud Luang Por Tuad Gammagarn Set of three Ongk Kroo Amulets, in three kinds of Muan Sarn Powders, all with 3 Takrut scroll spells inserted into the base (one solid gold Takrut in each amulet, with one silver and one bronze), from the Wat Prasat Bunyawas 2542 BE Edition. This triple set was Blessed by 108 Monks iin a very Large Buddha Abhiseka Blessing Ceremony, and were made in various kinds of sacred Powders, both without, and with Takrut, with the Gammagarn 3K solid gold Takrut insert version being of course the rarest, and most popular. 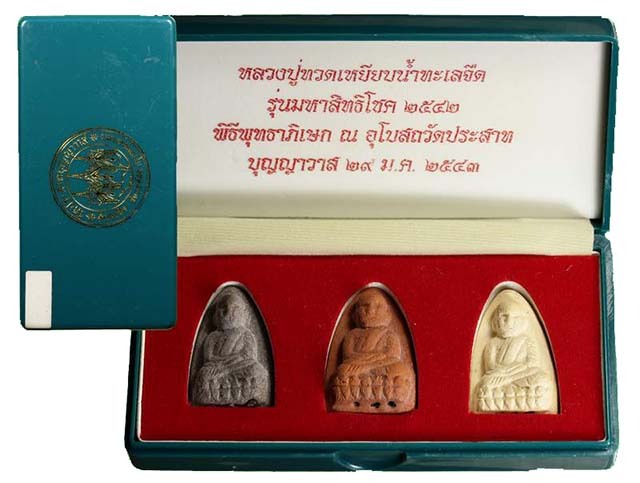 This edition is given great notability with devotees of the 2506 BE Wat Prasat series for the high quantity of Muan Sarn Powders used from broken amulets of that series. The amulets of this edition became rare already in the first couple of years after their release, and became very rare already, and were hard to encounter as early as 2545 BE. 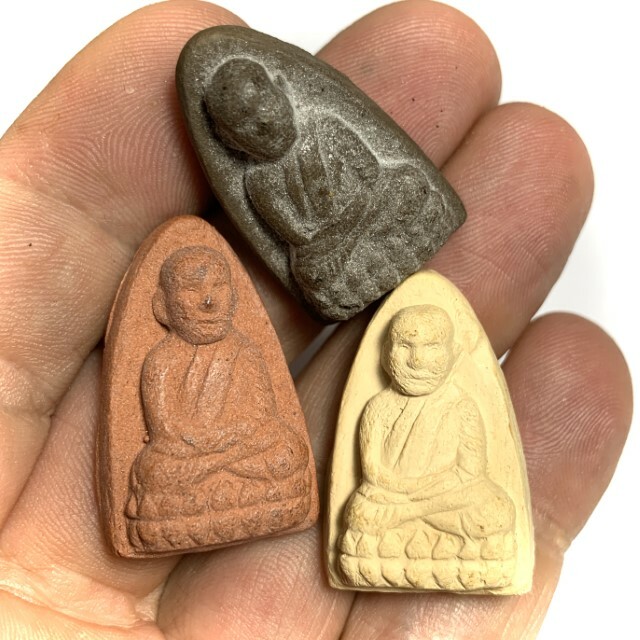 These Gammagarn Triple Gold Takrut models were Empowered along with the rest of the series, in a historically famous 'Piti Maha Putta Pisek' (Buddha Abhiseka Blessing Ceremony). The ceremony was attended by a total of 108 of the top Monks in Thailand of the time, who came from all parts of the country to assist in the empowerment.

Below; List in Thai of all 108 Monks officially present to Empower the amulets during the Blessing Ceremony, and perform the Chanting of the Dhamma Chakra. 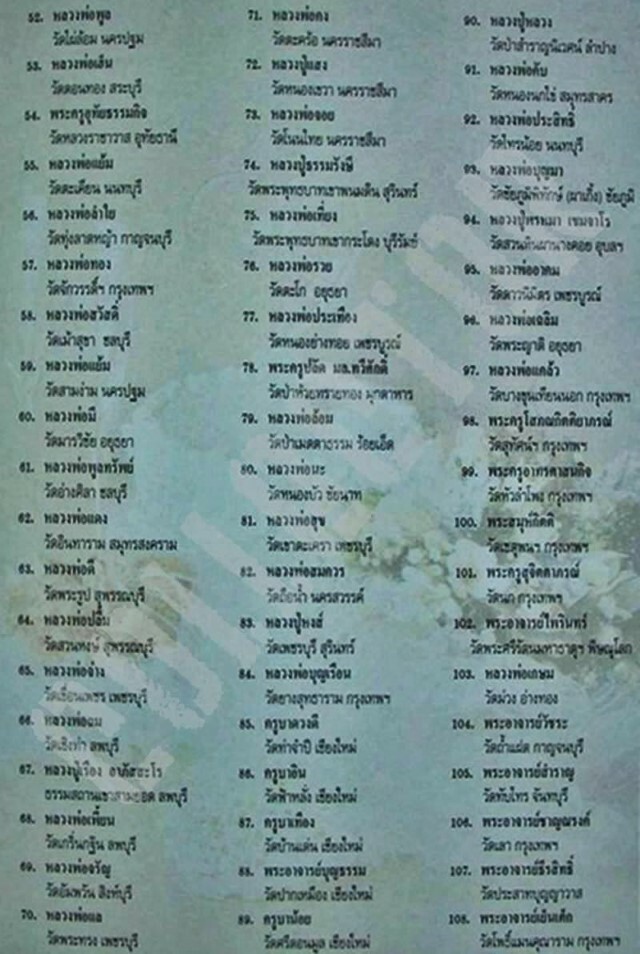 The ceremony, which included great monks, such as LP Yaem of Wat Sam Ngam, LP Hongs of Wat Petchburi, Kroo Ba Duang Dee of Wat Ta Jampi, Luang Por Lam Yai of Wat Tung Lad Hyaa in Kanjanaburi, Kroo Ba Noi of Wat Don Moon, Luang Por Lae of Wat Pra Song, Luang Por Ruay of Wat Tago, and Luang Por Mee of Wat Mara Wichai, is part of what made this edition so popular, for the certainty of power from such a large number of Great Master Monks. 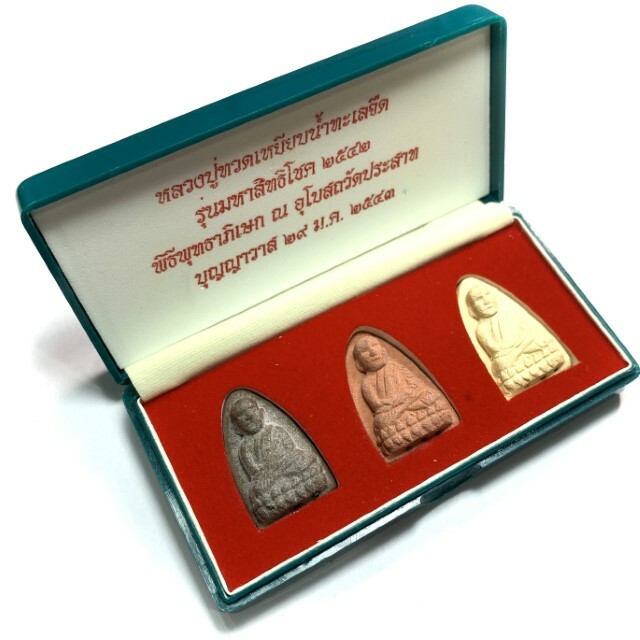 This Gammagarn Set of 3 Amulets containing original powders of the 2506 BE Edition in high quantity, and with 3K Takrut inserted into the Base (solid gold, silver and bronze), comes with the original Box, & in Pristine Condition. 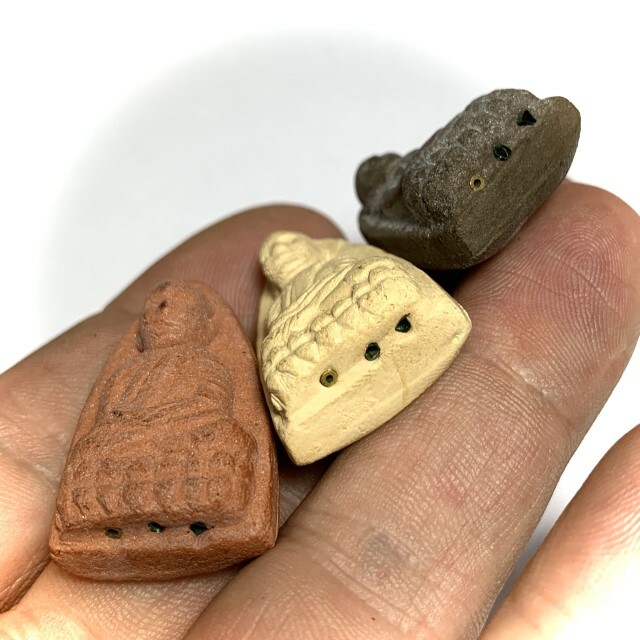 This composes a Classic Buddhist Family Heirloom type amulet set, that can only increase in Sacred Value (and of course monetary value), as Time passes. The perfect collection for devotees of the Pantheon of amulets of Wat Prasat, and a perfect Set of Heirloom amulets 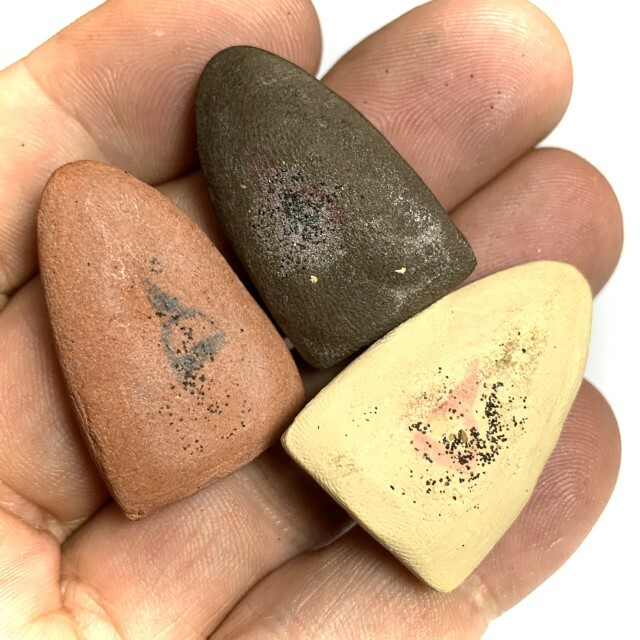 What are Family Heirloom Amulets?

Family Heirloom, or simply 'Heirloom' amulets, is a phrase coined by Ajarn Spencer Littlewood to translate the inherent meaning within the Thai words 'Pra Koo Baan Koo Mueang' (พระคู่บ้านคู่เมือง - Buddhist Images that are if National Buddhist Importance), and 'Pra Khong Moradok' (พระของมรดก - Historically Valuable Inheritance). By this, Ajarn Spencer means, that amulets of this kind are highly valued as items to collect and keep to pass down through all generations of one's family lineage (descendants), for them to remember the Buddha, and their own Ancestors, and carry the Merits of their Ancestors with them, as well as giving Merits back to their dead Ancestors who they inherited the amulets from. 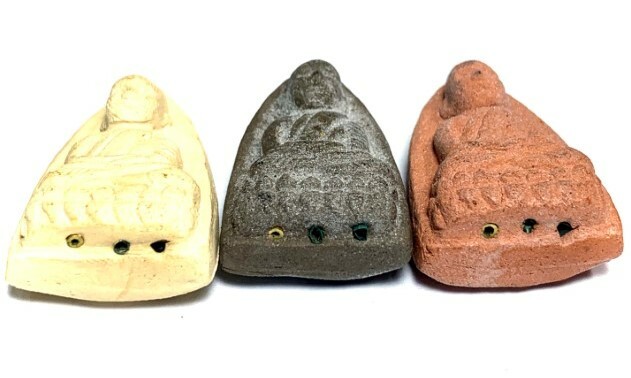 A total of 108 Great master Monks of the Time attended to perform empowerment during the large Buddha Abhiseka Ceremony, to bless the amulets, which were pressed from old Wat Prasat amulets from 2506 BE, as well as Pong Gao Somdej Wat Rakang, and Pong Gao Somdej Bang Khun Prohm crushed powders from ancient amulets of Somdej Dto. 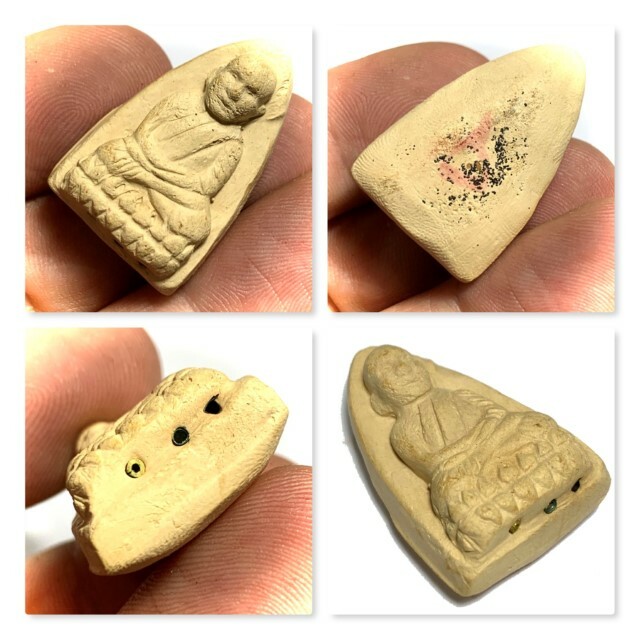 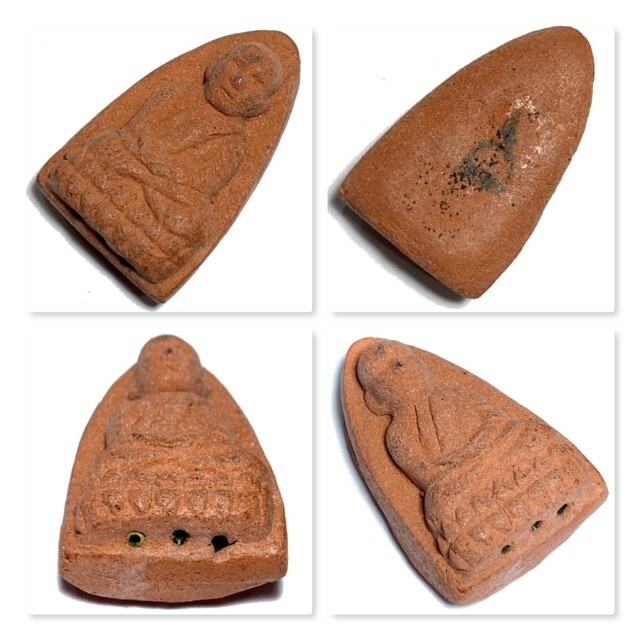